We started out from where we ended our last walk westward at the Harbour in Burry Port. This time the boats in the harbour gently swayed with the incoming tide. Some mud flats were still visible, and Gulls were probing the ooze for tasty morsels. A cheeky Pied Wagtail perched on the railings bobbing and watching its surroundings. The squat, red topped lighthouse could be seen just beyond the tidal gate. We crossed the Mariti Bridge, which was opened in 2006, to the other side of the harbour. Still in place but now obsolete were some historical maritime equipment, remnants of a thriving industrial harbour complex. 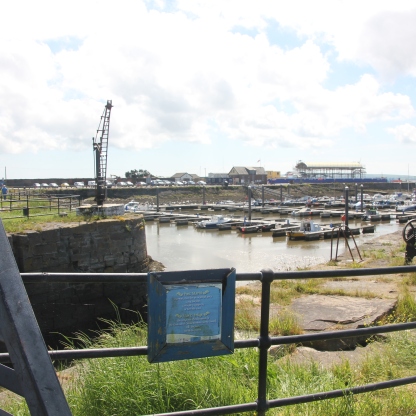 In the area were collieries, metal smelting works and copper works. Much of these industrial workings were attributed to George Richard Elkington (1801 – 1865) and  Sir Josiah Mason (1795 – 1881). Other earlier entrepreneurs included George Bowser, Thomas Gaunt and John Stanley whose endeavours led to the opening of several collieries, building of canals and tramways and the opening of Pembrey Harbour in 1819. Elkington and Mason were partners in the Pembrey Copper Works, opened in 1849 and run by the Elkington family until 1903. They provided workers’ houses and a non-denominational education for the workers’ children in the Copperworks School. They also owned an electroplating company, gold and silver plating on copper. Alexander Parkes (1813 – 1890) was the manager of the works and his many accomplishments included inventing a process for extracting silver from lead. He also electroplated delicate and fragile objects such as flowers and spider’s webs.

Also, in the area was Ashburnham Tinplate Works. It was opened by Lord Ashburnham in 1890 taken over by the Steel Company of Wales in 1951 but closed in 1953 because of the competition with the opening of the Trostre Works in Llanelli a few years earlier.

We passed the Harbour Lights Tea Room and then entered the dune system. 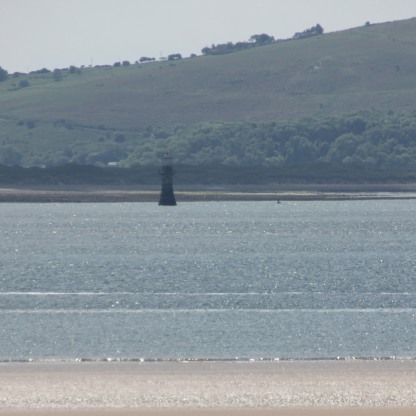 A boardwalk led off into the dunes and towards the shore. We went to explore. At the end the view was stunning. There were the two Lighthouses: small but beautifully formed Burry Port Lighthouse, which we had passed, earlier and the old gnarled and rusting Whiteford Lighthouse which has been ever present as we walked the Lougher Estuary. It was very close now (see other walks). Whiteford Point and Sands could be seen across the estuary protruding into the sea. The dunes supported a very different set of flora: Lesser Celandine, Sea-holly, Maram-grass, Common Ragwort, Sea Spurge and dried husks of Evening Primrose.

We retraced our steps to the WCP, then passed the Shoreline Leisure Home Park, where caravans were parked in serried ranks, all with beautifully tended gardens. Japanese Roses, Sheep’s Sorrel, Wild Carrot and Common Field Speedwell grew among the grasses. Up above us on the telephone wires was a brightly coloured Linnet singing its heart out. The remains of Pembrey Harbour then came into view. The silted-up harbour with its mud banks and runnels now grew Marsh Grasses, Thrift, Ribwort Plantain, Cat’s-ears, Black Mustard and Ox-eye Daisies.

To create the harbour, water was diverted from the Derwydd stream to scour a shipping canal in 1816, providing deep waters and safe anchorage. It opened in 1819 with loading stages, a pier and a lighthouse, together with two sluices in the harbour wall which when opened allowed the water to flush out the silt. In 1824 the Pembrey Canal was built, linking the harbour with the Kidwelly and Llanelli canal network, which facilitated the transport of coal from the collieries for export and the importation of iron ore for the Iron Works at Furnace. Competition from the larger harbour at Burry Port saw its demise in the 1870’s.However, an explosives company based in the dunes of Cefn Sidan used it until the beginning of the 20th century. This company was replaced by the Pembrey Ordnance Factory, which in 1940 suffered the first bombing raid of the “Blitz”. 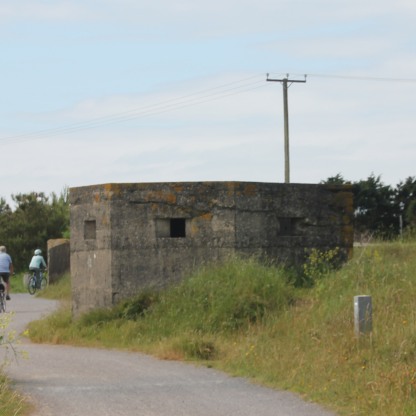 Pines and Broom were prevalent as we neared the Country Park. Magpies and Wagtails were seen here, again perched on telephone wires. We entered the Park where large swathes of grassland and congregations of mixed woodland were the views presented to us. In among the grasses were Black Mustard, buzzing with insects and a particularly bright bee; delicate pink Hedgerow Crane’s-bill contrasted with the blousy red Common Poppies; large swathes of Ox-eye Daisies and Cat’s-ears grew in swirls around mown grassland where picnic tables were also dotted. 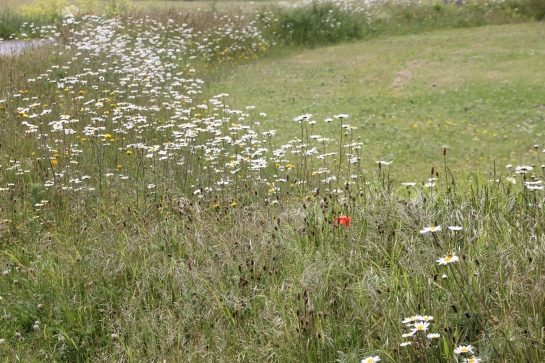 We climbed a hill towards a pine forest which sported a zip-line through the trees. The hill was covered with Burnet roses and Common Vetch, a lovely colour combination of White and Purple/Pink flowers. Small Heath Butterflies were clustered around the bottom of the hill, feeding off the Daisies and short-cut grass. From the top of the hill we saw caravans and tents camped near the shore and in the distance was Whitford Point. In the opposite direction Burry Port Lighthouse, Burry Port and Llanelli could be seen. Wild Parsnip, Nettles, Common Vetch and Herb Robert were growing under the Pines and Alder trees. 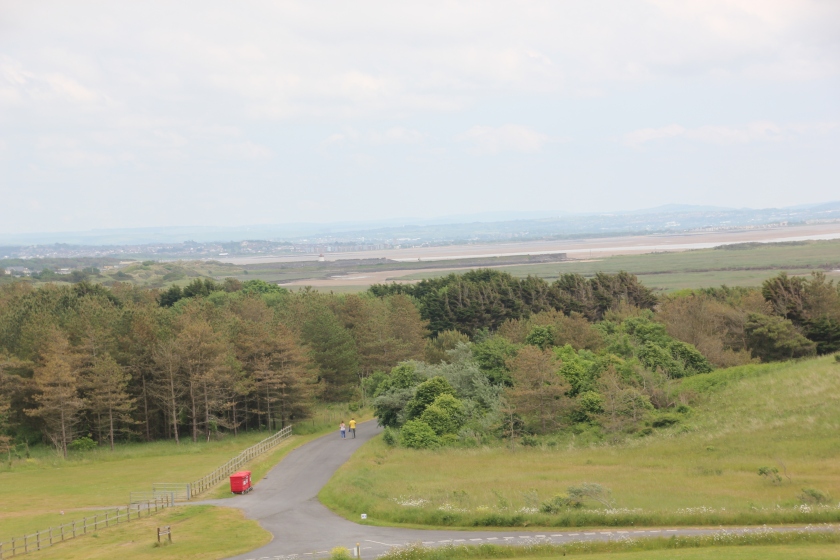 Then through the trees loomed a dry ski slope and toboggan flume, what a surprise! An outdoor sport complex and café were also on the site. Time for an ice-cream I thought! We sat and watched the skiers while we savoured our treat before setting out again. We made our way through a horse eventing course towards the carpark where my husband would collect us. We passed a rather colourful wood sculpture of a dragon and a tall tree covered in Ivy which resembled a giant man. 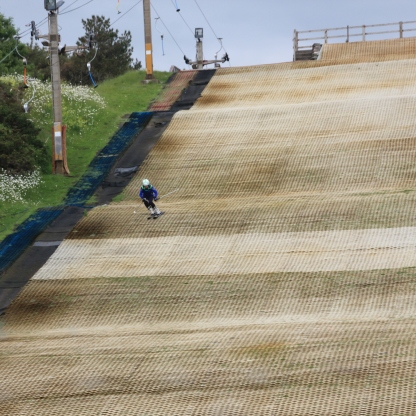 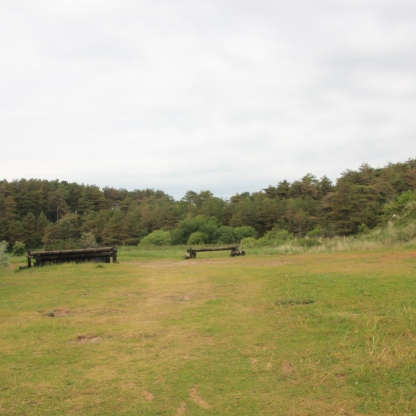 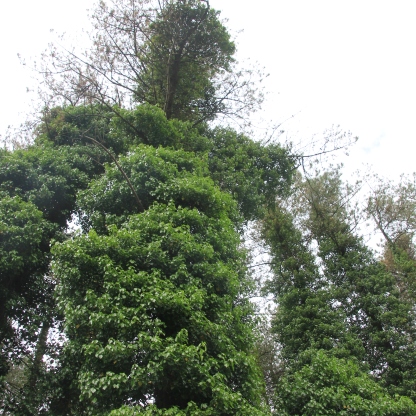 As we sat on the daisy covered grass surrounded by Lichen covered Sweet Chestnut trees waiting for my husband, a cheeky female Blackbird hopped up to us, no doubt hoping for a tasty morsel.

At Pembrey was  a WW11 airfield, RAF Pembrey, which now hosts the Welsh Motor Sports Centre. After the war conifers were planted on much of the dunes area where, in 1970, Pembrey Country Park was established. Five hundred acres of woodlands alongside eight miles of golden sand play host to cycling, horse riding, skiing, golf, tobogganing, campsites and adventure activities.