On a fine spring day early in April my daughter accompanies me to the Park and Ride on Fabian Way, Swansea. I park my car and then she drives me to Jersey Marine and drops me off at the Towers Hotel. I am going to follow the Tennant Canal today.

The canal was completed in 1818 and transported many of the products of the early manufacturing industry: bricks and ship building supplies. Haulage of coal from near-by collieries to Swansea docks was also important. The use of the canal for navigation ceased in the 1930’s but restoration, which is still active, started in 1974. Significant sections of the canal have been returned to use by a number of bodies headed by the Neath and Tenant Canals Trust. The upper part of the canal at Neath even runs boat trips in the summer months on the Thomas Dadford canal boat.

A cinder path runs parallel to the canal. Spring is certainly emerging after the cold wet winter. Trees are bursting with life. I pass a Horse-chestnut and Willow before I actually step on to the path. The Horse-chestnut has floppy leaves like claw hands with flower stalks starting to grow. These stalks are standing up straight all green and knobbly with an orange furriness about them. The Willows have lovely pussy-willows on them, furry tails starting out pink then turning to grey with yellow anthers.

The picturesque meandering canal has a towpath on one side and the Crymlyn Bog and Pant y Sais Nature Reserve on the other. This National Nature Reserve, consists in part, of the largest lowland fen in Wales, and despite its industrial and urban surroundings it is home to an amazing array of wildlife, some of which I hope to see today. Common reeds and Greater Tussock Sedge (Carex paniculata) line the path and it is evident that these plants are creating a nuisance of themselves because large areas have been fired by the volunteers of the Neath and Tennant canals trust. The plants are very resilient as the black patches are sprouting green shoots. Among the dead stalks Herb Robert is making an appearance: red stems and vivid green leaves but no flowers. Dandelions with their spiky yellow flower heads are lending some colour to the area. Trees along the canal route are mainly Willows but there are a number of Silver and Copper Birches with the occasional Alder and Oak, all of them waking from their dormancy and producing buds of various greens. The Alder is sporting ginger coloured catkins. Brambles, Bracken and Gorse bushes also vie for growing space. The vivid yellow flowers of the Gorse are brightening the brown deadness of the branches and reeds which are all around them. Many of the trees are festooned with silvery/green Lichen (Usnea subfloridana). 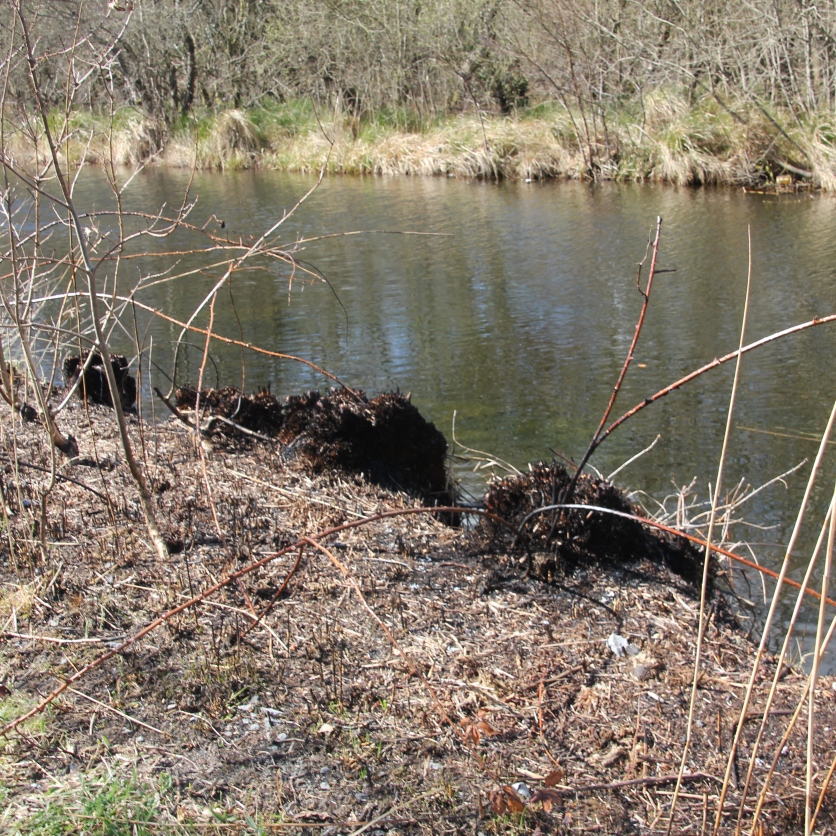 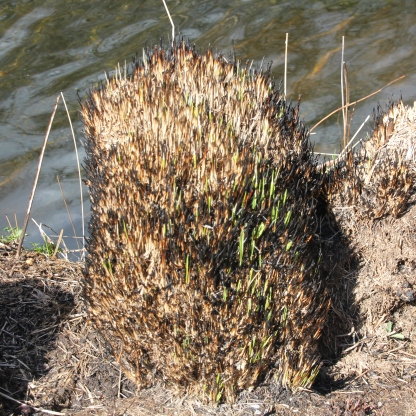 Soon a dampness pervades the air and a boggy section emerges. Here among the dead stalks of the Reeds are the spear like leaves of Flag Irises. Watercress floats on the water of the bog. It looks solid enough to walk on as it forms large mats of growth. Water horsetails (Equisetum fluviatile)are also present. Ivy clad trees and Moss covered logs are also here. I am sticking to the path and not venturing into the bog. 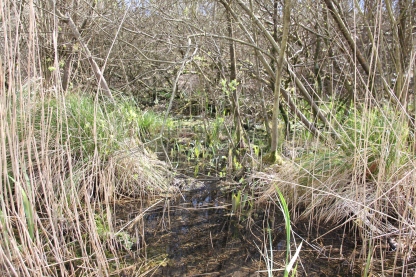 The canal is very clean. Rotting vegetation can be seen clearly at the bottom. Flag Irises and Bog Pondweed are growing at the edges with Hydrilla snaking its way through them. All is remarkably quiet given that the railway line, the urban and industrial sprawl of Swansea, are just beyond the trees.

A Peacock Butterfly makes a welcome sight flitting from Gorse to Gorse and amazingly landing on the path in front of me. Action stations! Very gently I creep forward so that I am in a position to take a good photo. Got it!

Although I have passed the boggy area mosses still adhere to the sides of the path, among stones, trees and grassy banks: Common Feather Moss, Anomalous Brittle-moss and Heath Star Moss. Other plants pushing their way through the leaf litter and dead Bracken are Ribwort Plantain, Wood Crane’s-bill and Creeping Buttercups. Here I meet the first lot of walkers, a family of four and their dog. Thank goodness he was not around when I was chasing the butterfly.

Shortly the canal splints in two. The wider section heads to the right, while the towpath veers to the left into a scrub area and this part of the canal becomes choked with Reeds. Here skeletal remains of plants are evident but again Spring is asserting itself and growth of Rosebay Willowherb, Thistles and Herb Robert can be seen among the dead litter. From the number of Rosebay Willowherb shoots that I see, this area will be a picture in pink come the Summer months.

I then enter a wood where Brambles mass on each side of the path, filling the spaces between the moss covered trunks of the trees. The monochrome is suddenly interrupted by a flash of vivid pink. It is a flowering current bush (Ribes sanguineum) with its pendulous flowers shining brightly in the middle of the wood. Reeds can still be seen through the contorted tree trunks; the canal or stream must be in there somewhere! The place is alive with bird song. I have seen a few birds but not enough to fill the numbers of voices I hear: a Robin, a Long-tailed Tit and a Green Finch. 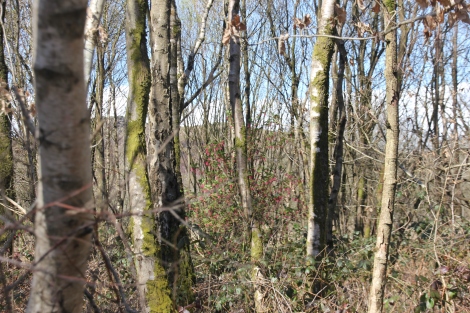 The stony path is replaced by tarmac but is still in the woodland. However, the

Japanese Knotweed thugs have taken over the area. It may be mostly dead sticks now but green shoots with their distinctive red mottling are starting to emerge. Another thug, Buddleia, is also muscling in in the undergrowth. It is quite understandable how the Victorian plant hunters were enthused by the beauty of these plants never knowing the uncontrollable impact that they would have in later centuries. The trees thin out and the canal or stream comes into view still choked 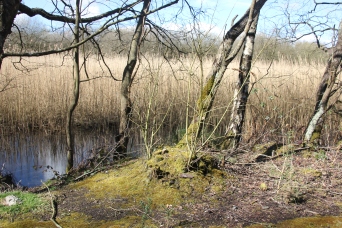 to some extent by the reeds. The huge, bright golden yellow buttercup flowers of the Marsh Marigolds are a striking contrast to the dried reeds at the edge of the water, Water-plantain is also sprouting at the water’s edge and dried heather grows on the bank. My passage down to the water has surprised some Mallards and they quickly swim away through the reeds, squawking as they go. 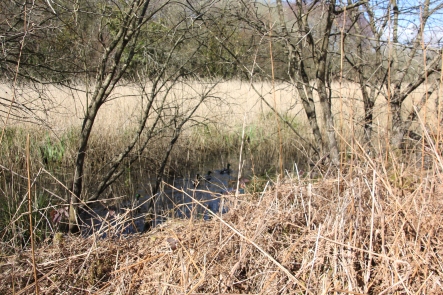 A picnic table is conveniently placed where the trees have thinned out. I make use of it to rest and take on some fluid and sustenance. As I sit quietly a couple of walkers pass and also a cyclist. The walkers acknowledge me with a nod and “Lovely day isn’t it?” While the cyclist is oblivious to the surroundings and speedily rides down the track scattering everyone in his path. The area shows signs of habitation; a number of old crumbling walls are evident. The walls support ferns, mosses and lichen: Hart’s Tongue, Maidenhair Spleenwort, Lepraria lichen and Common Feather-moss. There are also broken stone pillars, which were part of a substantial structure at one time, scattered among the crispy bracken litter. A few Dogwoods are starting to bud, displaying bright red branches, yellow leaves tinged with orange and flower calyx like pale honey nut clusters. 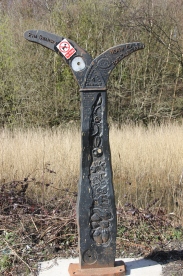 A large iron way-sign, adorned with sea creatures, stands at the side of the path: Swansea 2¼M, Neath 6M, Port Talbot 8¾M. It is part of the National Cycle Network and is one of a thousand mileposts funded by the Royal Bank of Scotland and the National Lottery. Shortly the path is edged by a high brick Ivy covered wall. At its base Brambles, Buddleia and Herb Robert are growing; it casts shadows upon the path. The trees on the other side of the path are hosting Robins and Long-tailed Tits. Both are pecking the moss, lichen and pussy willows that ornament their branches. 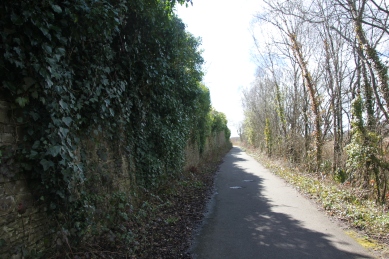 Over the reeds the conurbation known as Port Tennant looms in the distance. Glimpses of the houses can be seen through the fuzzy branches of the trees. The path goes on. Wild Privet, Broom, the ever present Reeds, Gorse and Silver Birches line the route. The Broom is budding but is still hanging on to its black clawed seed pods. My head is in the clouds, a few of which are interrupting the immense vivid blue sky. My feet are treading the path where the undergrowth is populated by Clevers, Wood Crane’s-bill, Broad-leaved Dock, Bush Vetch, Ivy, Feather-moss and Male ferns.

Through the Silver birches and straggly Gorse a glimpse of the railway tracks and trucks is gleaned. Further on to the right of the path is another wood, Ashlands Wood, 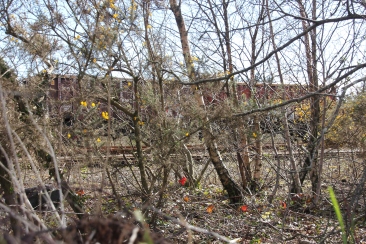 a Welsh Forestry Commission venture. Leaf litter paths lead off into the interior: no sign of the reeds or water. A mixed planting of broad leaf trees: Alder, Hazel, Hawthorn and Birch. Some tree stumps are festooned in Fungi, they look like layers of crinkly Spanish fans or turkey tails. The hum of traffic can now be heard and to the left of the path, a very short distance away, is a bridge carrying the dual carriageway, Fabian Way. 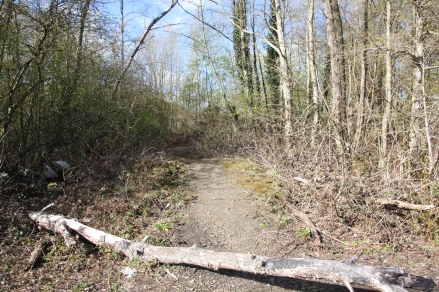 The path now sidles around a playing field and Sports Centre but flora not encountered yet today still seem to be cropping up: Mullien, Heather, Polypoidy Ferns and Ivy-leaved Toadflax with incumbent Bee. The playing field area occupies the former  ‘Carbon Black’ works and tar distillery. The houses are getting closer as walls, left and right, funnel me towards a bridge. The fuzziness of the trees I saw previously belong to emergent pussy willows, white with bright yellow pollen tips and trees dripping with catkins.

At the bridge is a small garden and a carved wooden sign belonging to the Ashland Project . This project cleared and transformed the area occupied by the United Carbon Black plant in the 1980’s. The residents of the district had suffered for over 20 years from the pollution caused by emissions from the plant. The bridge crosses over a weed choked culvert which was once part of the Tennant Canal. 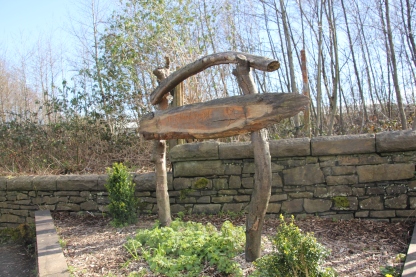 I proceed into Port Tennant and walk a short distance on the residential road, passing a garage where I suspect there is ‘NO PARKING ALLOWED’. Then I turn left to circum-navigate the Park and Ride because railings prevent you entering at this point and make you enter at the paying office. I pick up my car after duly paying for her stay and head home. Another delightful day walking.

I arrive home and I take a walk in my garden to make sure that the greenhouses are secure and the heater is on and full of parafin. As I pass the pond the sight that confronts me  is one that I would have expected in the bogs of the Tenant Canal: frogs mating and making a terrific racket. What a day! What a sight!