It is the first Saturday in September and summer is coming to a close. The plants are setting seed or fruit and all around is a somewhat earthy smell in the air. The day is bright and warm; the sky is blue with a few clouds wafting across the heavens. No dual cars or buses today: my husband is doing the dropping off and picking up. My daughter and I begin by following a public footpath from the Prince of Wales towards Kenfig Pool. This path takes us on the opposite side of the pool than previously mentioned. It is quite narrow and overhung with Brambles and Bracken. We soon pick up the WCP sign and are on our way. Here the path is not overhung but Greater Plantain (Plantago major) is growing profusely. The dunes stretch out before us and our goal, Margam and TATA Steel look quite close. This is but a trick of the terrain and the light; it is some way off. The undergrowth and Bracken are alive with insect life. Numerous Meadow Browns and Gatekeepers are flitting about: Cicadas (Cicadidae), Grasshoppers green back (Stethophyma grossum) and brown with red tipped abdomen (Omocestus rufipes), Daddy Long-legs or Crane flies (Tipula oleracea), Dragonflies or Common Skimmers (Sympetrium pedemontanum),Garden Carpet Moth (Xa nthorhoe fluctuata), Cobweb Spiders (Agelena labyrinthica), and a light Peppered Moth (Siston betularia).

As the path becomes sandier Bird’s-foot Trefoil, Lady’s Bedstraws, Viper’s Bugloss, Goat’s Beard, Agrimony in seed, Clover, Yarrow, Meadowsweet in seed, Fleabane, Burnet Saxifrage, Eyebright and Evening Primrose in seed are the dominant plants. In fact there are also a number of flowers with fluffy seed heads which float away on the breeze as you brush past them: Cat’s Ears, Goat’s Beard, Bristly Oxtongue, Rosebay Willowherb, Ragwort and Marsh Thistles (Cirsium palustre). 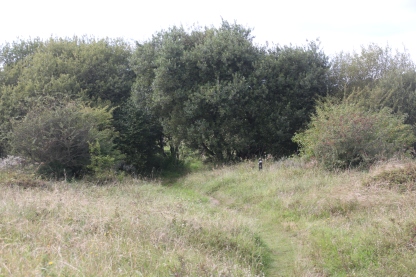 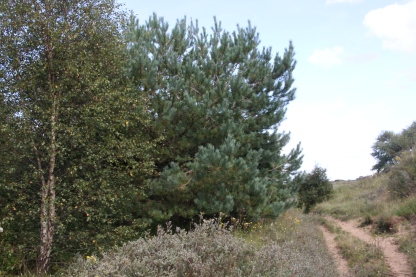 Patches of denser trees and bushes occur and many are producing fruit: Crab Apples, Rose Burnet, Brambles, Dog Roses and Honeysuckle. Among the Silver and Copper Birches are a number of Speckled Woods. The undergrowth where some Blackthorn bushes are growing sport a Silver Y moth (Autographa gamma).There is a Mushroom in the grass but I do not know what it is, I never touch them unless I am certain that it is not poisonous. 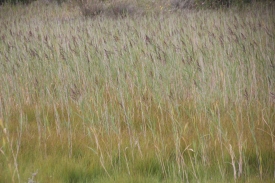 As the dune paths become steeper and sandier, the going becomes a little tougher. The song says: ¯“When the going gets tough, the tough get going”¯. So it is onward and upward. A Common Grayling suns itself upon the sand, quite difficult to see; its camouflage is brilliant. Lesser Sea or Sand Spurrey are peeking out through the Sand-grass and Dewberries. As we trudge between the dunes we disturb a flock of small birds feasting possibly on the Dewberries. They fly away very fast and Iam only able to catch a few photographs of them in flight. They could possibly have been Linnets (Carduelis cannabina), one of which was resting upon a dead prickly branch further along the path. We have walked quite a way and not passed a living soul up to this point.

Depressions, where water has been present, have dried up leaving regions of sandy wilderness surrounded by grasses and plants: Common Knapweed with seed heads, Ragwort, Hemp Agrimony, Hop Trefoil (Trifolium campestre), red Clover seed heads and Dewberries. The dunes all around us wave their grasses in the wind, while clusters of Sea Holly and Common Eyebright clothe their sides. 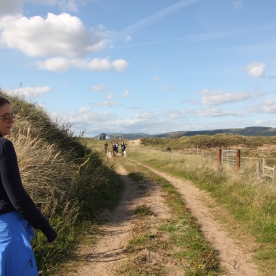 There are more people walking, riding horses and playing with dogs along here. Glimpses of the sea can be seen to the left through dunes and vast areas to the right are of marsh land. As we approach the Marshland the usual Docks, Reeds and Rushes appear. In amongst them we can hear birds’ song and a Swan serenely gliding through the water until it upturns itself, while feeding, presenting us with a well turned backend. We cross some of the marsh via a wooden bridge. At the furthest end of the bridge, Mayweed and red streaked Bird’s-foot Trefoil are littering the area. Entering a waste land and more dunes but keeping the marsh to our right we follow the signposted WCP. Gatekeepers, Common Blues and Large White butterflies are fitting between the flowers. The path takes up and down more dunes with a fence cutting us off from the marsh, which is still to the right of us. Insects are buzzing and we see more Dragonflies and Grasshoppers. 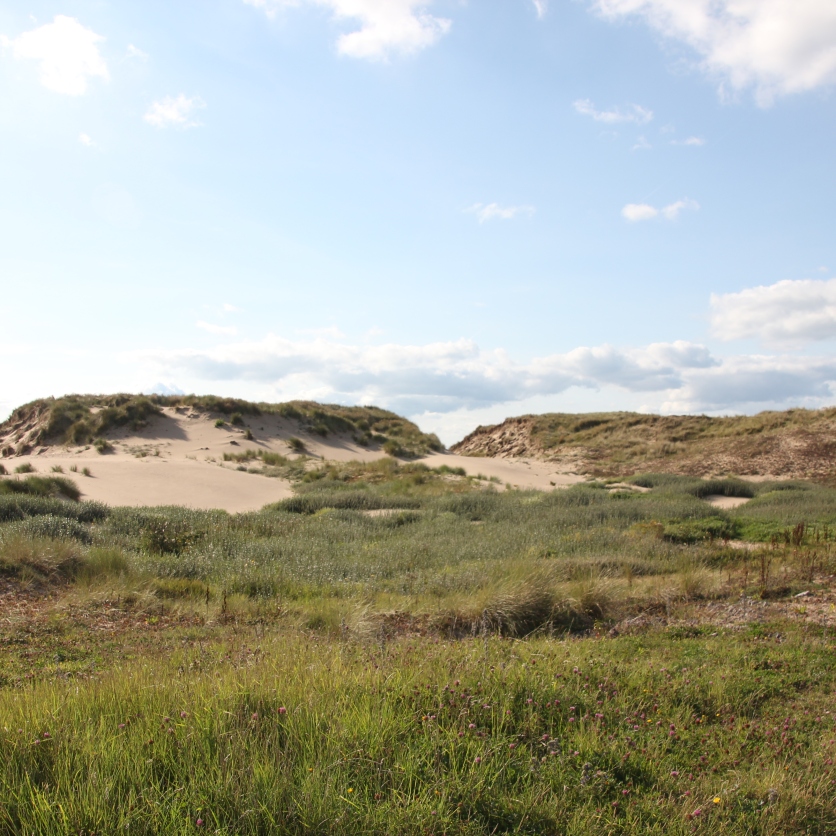 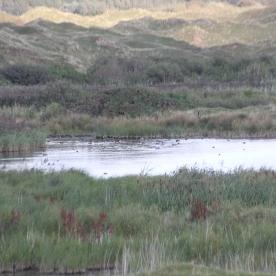 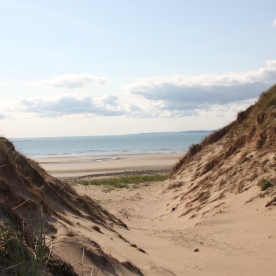 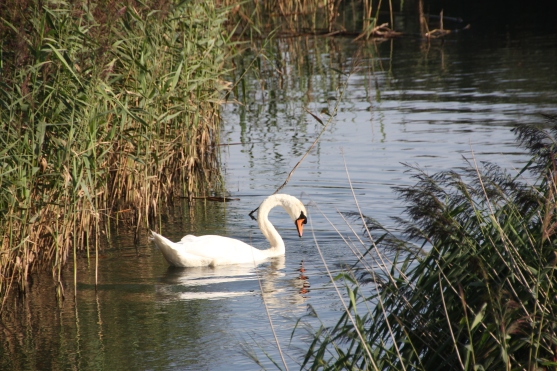 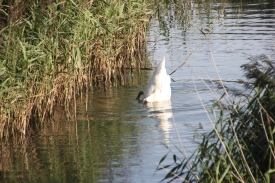 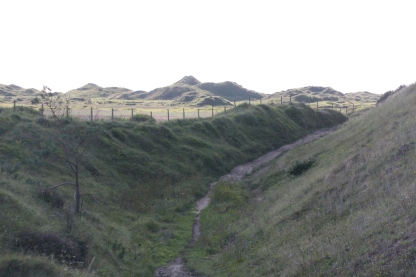 A few bushes of Sloes, which are ripening nicely, line the path. Unlikely as it seems but there are ferns (Polypododium vulgare) growing at the tops of the dunes. Meadowsweet in flower and in seed, Wild Thyme, Sea Buckthorn with berries and occasional stunted conifers also line the route: Yew (Taxus baccata) and Scots Pine (Pinus sylvestris) also a few Holly bushes (Ilex aquifolium).

The route then meanders into a mixed tree zone, more shaded and cooler, a wooden bridge, roped on the sides, guided us over a marshy area, where dragonflies were skimming. Himalayan Balsam seems to be everywhere and as we brush past them they spray us with their ripe fruit seeds, “ping, bing , zing and zwing”. The path is blocked and we negotiate some large concrete “LEGO” blocks to take us back onto a dirt or cinder road, probably the unused railway track; at a “T-junction” we turned left. This led us through Silver and Copper Birches under-planted with Fleabane, some with seed heads, Mugwort and Gorse, again with seed heads, and Honeysuckle with berries, trailing through it. There are open regions with flowering plants, grasses, splashes of orange with spiky leaves, Monbretia (Crocosmia aurea), pink clusters of Soapwort (Saponaria officinalis) and lots of Common Blue butterflies, both male and female. 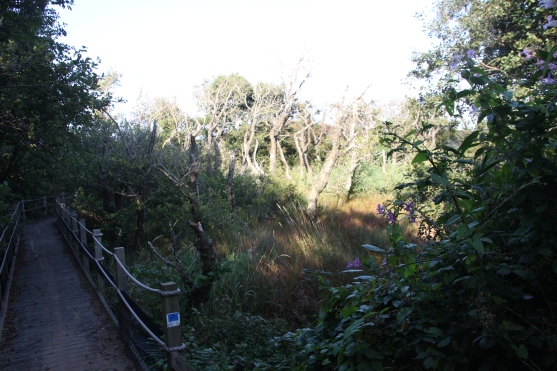 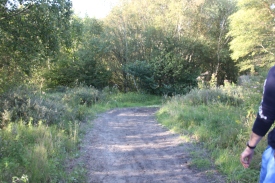 The track becomes a little boggy and we have to negotiate our way through the standing water and ditches without getting our feet too wet. Himalayan Balsam and its popping noises surround us; Pennywort grows in clumps and Purple Loosestrife (Lythrum salicaria) thrusts its flower spikes through the reeds. The ditch water is covered with Pond Skaters (Gerris lactustris) their six legs resting on the water causing small dips in the surface film. The canopy above us sometimes showers us with fruiting bodies falling from the branches: the “helicopter” seeds of Sycamores and pendulous seeds of Ash.

Through the trees there are glimpses of our destination: TATA Steel. We cross a wooden boardwalk over the marshes watching out for the Grasshoppers and projectile seeds dispersed by their movements among the Himalayan Balsam. There is a Brown Hawker Dragonfly (Aeshna cyanea) sitting perfectly still on the handrail of the boardwalk. It doesn’t seem to be bothered by our passing, but a Red Admiral Butterfly (Vanessa atalanta) is very jumpy and flits from Buddleia flower to flower.

The path parallels the railway tracks, breaking  out into meadowland where cows are grazing on the left and marshland spreads out to the right.  Flowers , grasses  and bushes laden with fruit are all around and TATA is ever closer.

White seems to be  the dominant colour; Burnet Saxifrage, like candy floss, towering over the dainty Eyebright and large swathes of Rosebay Willowherb, not pink flowered but covered with white cotton threads. There is a saying that “when the fireweed is in cotton the summer is soon forgotten”, the summer is coming to a close. This is also borne out by the multitude of fruit on the trees and bushes: Crab apples, Blackberries, Rose Hips, Blackthorn and Hawthorn berries. Flowers are setting seed as well: Perforate St. John’s-wort (Hypericum perforatum) with its red berries , Bulrushes, with their brown velvety pokers and all those mentioned earlier. Some plants not encountered before include Yellow Common Toadflax (Linaria vulgaris) and Purple toadflax (Linaria purpurea). Nature is rushing to complete its annual cycle and ensure that its progeny has a good start. Just before we leave the path there is a patch of Wild Strawberries, a very few berries which did not last very long, delicious, nestled under some Oak trees with acorns.

Then we hit the tracks, literally. The dusty road takes us past industrial buildings and storage yards and over the railway lines, of which there are many. A gate is positioned at each end of the gauntlet of lines with appropriate warning signs. Two very fast Intercity, Cardiff to Swansea, trains sped through as we are walking over the lines. We are constantly looking left then right before cautiously crossing each set, a hairy experience. And there to meet us is my husband, looking a little put out because he had to miss the last minutes of the Italy vs. Wales’s rugby match. But we won so that’s the main thing. My apologies to anyone who doesn’t support Welsh Rugby. 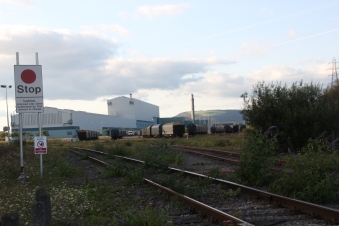 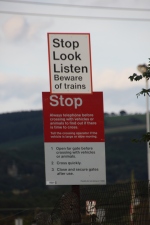