In late summer, with the weather still glorious, the family embarked on another walk on the Gower Peninsular. This part lay on the east side of the Lougher estuary. This was a two-car event. One car was parked at the Whiteford Sands car park, Llanmadoc (a field a little way from the beach). This would be our end point. The second car we parked on the road between the Welcome to Town Pub and the Church of St. Rhidian and St. Illyd in Llanrhidian. The church is set against a backdrop of wooded cliffs that were one time quarried for limestone and overlooks the Llanrhidian Marshes. There was a church here in the 6th century dedicated to St Rhidian, who was possibly a Celtic monk or Tryrulhid the wife of St. Illtyd. The church seen today is of the 13th century built by the Order of Knights Hospitaller with the addition of a tower and chancel in the 14th century. 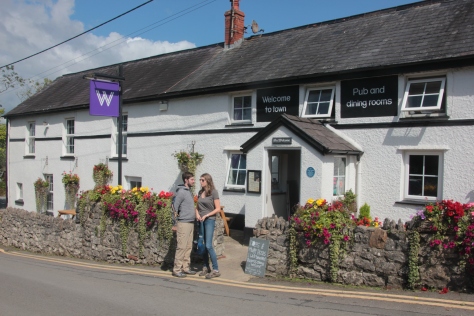 We followed the Dragonshell sign past the Dolphin Inn and the other side of the church. 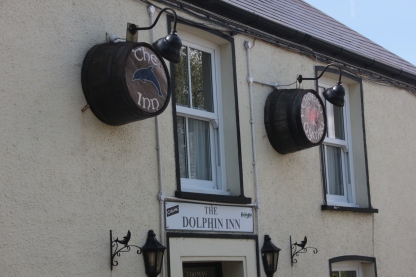 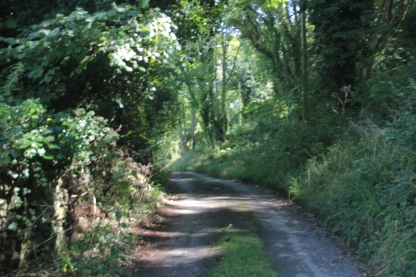 The woodland path would take us towards Weobley Castle and Landimore.

Shade loving plants: Herb Robert, Male Ferns, Hart’s Tongue Ferns, Ground Elder, Hemp Agrimony, Brambles and Nettles grew under the trees, many of which were festooned with Ivy. The Hawthorn bushes were bursting with berries just turning from green to red. Teasing us through the trees were glimpses of the saltmarsh, the

estuary and herds of sheep. There was a particularly fine specimen with large chunky horns staring at us over the fence. We left the dimness of the woods and emerged into the warm sunshine of several fields; still the coast was tantalisingly far off in the distance. Sheep there were in abundance, some in the fields with lush grass to munch on, others on the sparsely 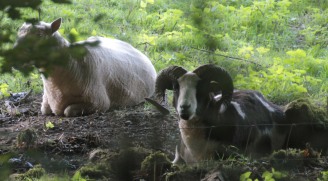 sedge covered saltmarsh. The lush grass of the fields also sported Knapweed, Cat’s-ears, Clover, Nipplewort, Pineappleweed, Knotgrass, Greater Plantain, Fleabane and Silverweed. There was also an abundance of mushrooms in the grass, but not being aficionados of the fungi family, we were reluctant to pick any.

In the distance, I mentioned the estuary

margins and leading up to them were masses of Common Reed swaying in wind; their purple feathery fronds were bending to almost horizontal. A stile placed incongruously in the middle of a field presented an opportunity for “the children” to mount and play “I’m the king of the castle”. 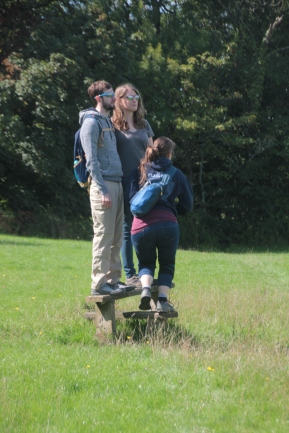 From sunshine into shade we scrambled, dry-stone walls hemming us in. The walls were enveloped in a tapestry of green life: Feather mosses, ferns (Maidenhair Spleenwort and Parsley Fern), Lichen, Wall Rue and Foxgloves.  The path narrowed with bushes and brambles crowding above us. The brambles were covered in sweet black berries. We knew they were sweet because we ate our fill before moving on. Also, on the Brambles there were several butterflies, sunning themselves on the upper layers. Lots of drab Speckled Woods, some in pairs, rising and falling in a swirling dance were accompanied by a few strikingly colourful Red Admirals. As we caught a glimpse of the skyline we could see the ruins of Weobley Castle looming above us. 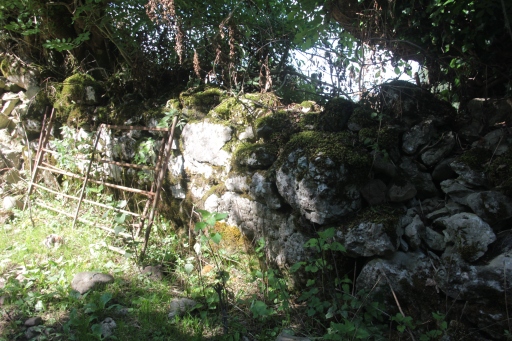 Weobley castle is a 14th century fortified manor house once owned by the de le Bere family. Other notable residents include Sir Rhys ap Thomas, an ally of Henry VII, the Herberts and the Mansels. When Sir Rhys’s grandson was executed for treason during the rule of Henry VIII, Weobley returned to the Crown.

We soon entered another wooded area where moss covered boulders lined the track. Pockets of  Ground Elder, Himalayan Balsam, Wood Avens – Herb Bennet were our accompanying flora as we walked through the trees; the castle was now hidden from view.

Sunshine again and the prospect of walking through lots of fields: this was turning out to be more like a field trip than a coastal walk, although, the saltmarsh was always in the distance and the woods were always to our left. Fresh white faces of Ox-eye daisies and fluffy seed-heads of Creeping Thistle complemented the other grassland flora. We followed the fields from stile to stile or gate to gate.

There were more people and dogs about at his point, many walking on a path running down to the estuary and through Landimore Marsh. At the end of the track was an old abandoned American look-out post. Several ponies were grazing on the marsh. Interestingly the ponies have adapted over the generations to the tides and calmly stand in the rising water waiting for the tide to recede. In another field with a gentle slope, we were surprised to see people skate boarding or scooter riding on a slalom course. Apparently, they were from the Gravity Centre Boarding Club.

HORSES ON THE SALTMARSH

SHEEP ON THE SALTMARSH

One field was very damp with muddy patches of sharp rush, water pepper and redshank. It was   bordered by Hawthorn and Holly bushes, both with red tinged green berries . The sky above us was a lovely azure blue with candyfloss clouds and a Buzzard was gracefully gliding in circles overhead.

Another field was full of Sheep, which we approached with care, not wishing to spook them. They, however, were not concerned; they continued munching away and just looked at us with knowing stares. Yet another field, this time filled with cows and bullocks: here, we gingerly made our way around them  trying  not to disturb them. We thought we had done a good job when they all started deliberately moving towards us. “Walk faster, walk faster, walk faster, don’t run, make for the gate.” We just passed through the gate as they reached us and our panic subsided. Thankfully Landimore village was just a short field away. This area was called Bovehill a part of the National Trust Land.

Field of Cattle and Llandimore Village in Background 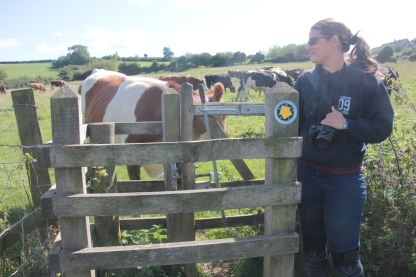 The woods on the edge of the fields were heralding autumn’s approach with many of the trees, like Ash and Hazel, sporting seeds and nuts. We walked through the village on a narrow road past pretty houses and gardens and some ruins. At last we were on the Saltmarsh. This was pretty nondescript with sedges and rushes. The sea or estuary was still a long way off. When we looked backwards we could see the castle was on the on hill, we had walked right under it. 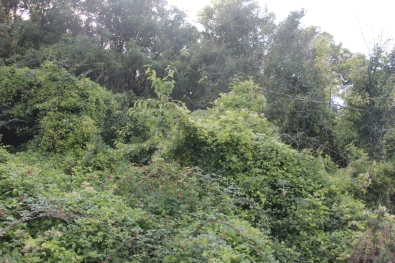 A bench presented itself on the edge of the village so we took the opportunity to stop for some sandwiches and  a drink. Fully replenished, we continued along a rough path which skirted the saltmarsh and was edged by trees: Ash, Hawthorn, Gorse, Brambles and Wild Roses with hips, all of which clung to the hillside. Travellers Joy cascaded through the vegetation with gay abandon. 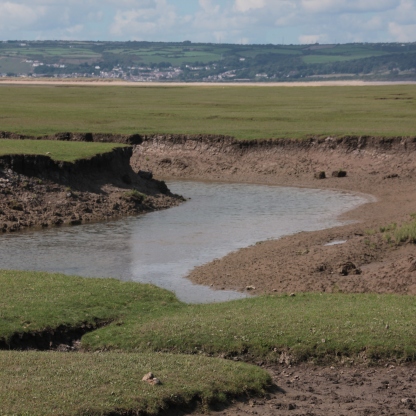 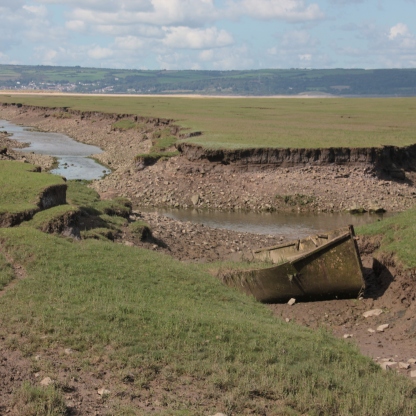 This is Landimore Marsh. Pools of water, and waterways cut through the marshes: Great Pill and Burry Pill. Boats were cast in the mud; they looked like they had been there awhile as grass and weeds were growing  in them. Dead crabs were all around. Patches of Samphire, Saltmarsh grass, Sea Purslane, possibly Marsh Cudweed were growing besides the streams and runnels.

Cliffs of Cwm Ivy Tor loomed in front of us and upon the flat expanse of the marsh structures emerged: a drystone wall and a wooden bridge which crossed over a river. Here we were faced with a choice: take the high tide route or to follow the track to Whiteford point which would  take us over concrete stepping-stones. We braved the latter route. Sea Asters were all around us and some sheep skulls nestled in the sedges. 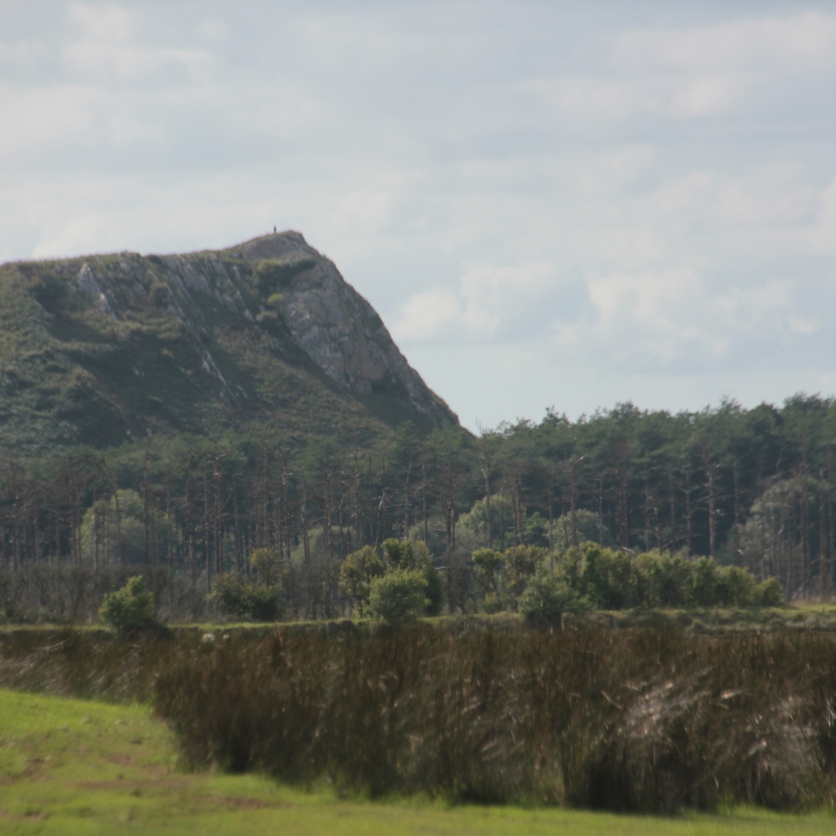 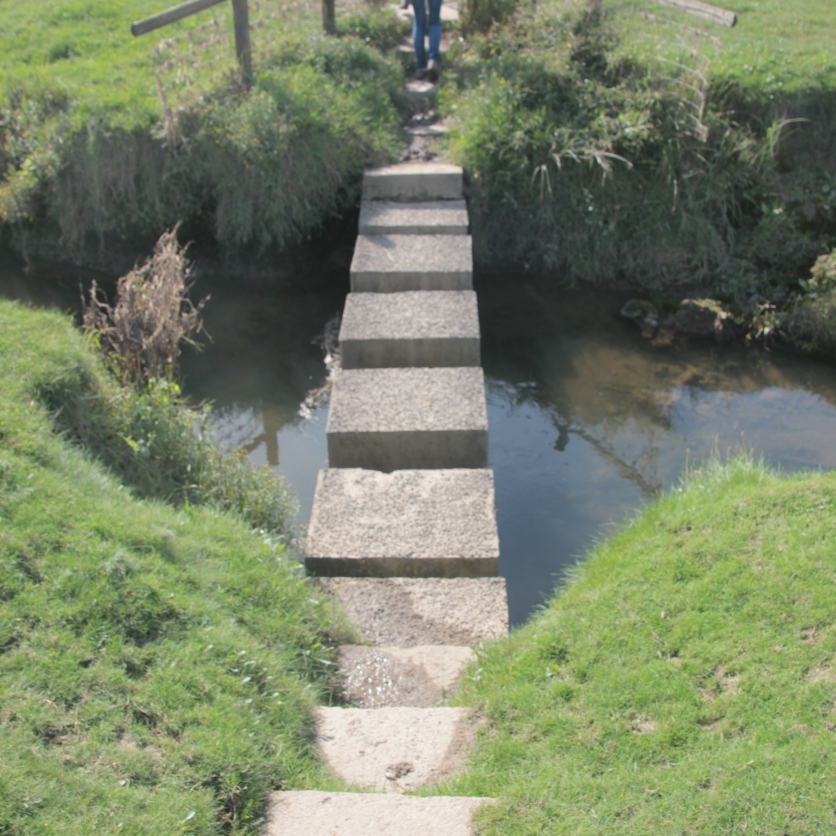 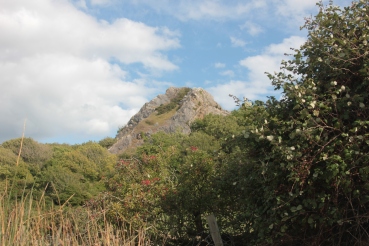 As we walked through Whiteford nature reserve, Great Willowherb and Marshmallows were growing in amongst the rushes. Looking backwards we had walked under North Hill Tor, a striking cliff thrusting up through the woods. The conical structure had layers of rock which had been turned towards the vertical.

Subsidence on the causeway route meant that an alternative path through the woods of Betty Church and Cwm Ivy Nature reserve needed to be taken. These woods were part of the Whiteford Nature Reserve. It was a really pretty track. As we climbed through a passage between rock formations, (very Lord of the Rings like), mosses and ivy festooned the rocks and trees, ferns sprouted everywhere. We needed to focus on our tread as tree roots were emerging through the leaf litter to surface and were liable to trip us up. 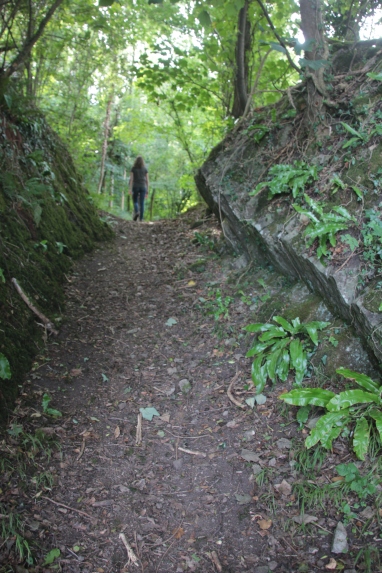 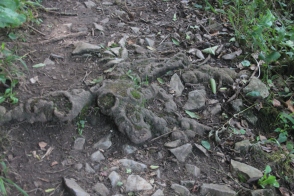 Red Campion and Elder trees dripping with black juicy berries, surrounded the Cheriton Bird Hide, which overlooked Cwm Ivy Marsh. This was owned by the National Trust. We sat awhile scanning the marsh with our binoculars but there were no sightings of Hen Harriers, Kestrels, Osprey and Kingfishers, known to inhabit the area.

These are some of my favourite birds and  I have rarely seen them. We only saw a Wood Pigeon in a dead lichen covered bush. In fact, the whole area looked dry and lifeless. There were dead Pine trees in rows, white skeletons of what would once have been a  vista of deep green lush growth. Much of the grass had withered but some Lyme Grass and Sea Lavender had managed to grow in patches amongst the sedges. The diversion we were taking might be explained by a breach in the causeway. Salt water from the Landimore Marsh has infiltrated the fresh water of Cwm Ivy marsh and the trees have suffered.

Cwm Ivy Marsh was once claimed from the sea to be used as farmland; it was protected by a sea defence. However, in 2014 the sea wall was breached and the sea is reclaiming the land. Nature has been allowed to take its course and the marsh has now been transformed from a fresh to a sea water habitat.

We continued through the wood towards Llanmadoc. We were almost there when my son confronted us with a bombshell.

“ Mum, I’m awfully sorry but I have left the keys to my car in your car in Llanrhidian”.

There was no way I was walking back to Llanrhidian! 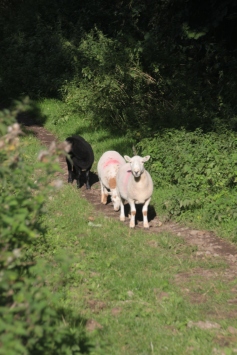 We knew that Cwm Ivy Café was near where we left the car. Before we reached there, our way was baaaared by some disgruntled sheep. Having negotiated with the sheep, we enquired in the café about a bus or taxi. Buses were very infrequent, so the taxi was for us. Who had money? Empty pockets and sad faces from the “children”. Ah! Super-mum to the rescue. I always carry a small amount of money and my bus pass at the bottom of my rucksack for emergencies. This was one such emergency. I just had enough for a taxi. The café owner phoned for the said taxi, then we were on our way back to Llanrhidian.

Of course, we had to drive back to Llanmadoc to fetch my son’s car. This was not the end of the day’s outing. The roads are quite narrow and there were several vehicles on the road and unfortunately, we met the one and only bus. We were stuck in the narrow roads for an hour while cars manoeuvred out of the way of the bus. Eventually we arrived at the field carpark, reunited with my son’s car. Then it was the hour drive home. Exhausted!