Our start point today was the roundabout near Tesco Pengam. My daughter and I made our way along a rather busy road called Lamby Way. The road, via a bridge, crossed the River Rhymney which empties into the Severn Estuary.

We stopped on the bridge to look at the muddy tidal channel. The tide was out and the banks were oozing with mud. Patterns were etched onto it, some caused by the swirling and flowing river and others by the wetland birds, mainly Seagulls, who were congregating in large numbers upon the brown sticky mess. There were Herring, Lesser Black-backed and Black-headed Gulls all either paddling in the water or probing the mud with their beaks.

Just after crossing the bridge we veered left onto a path, which took us away from the road, into a small park. This was Tredelerch Park a former landfill site. It has a lake at its centre and is managed as a Nature Reserve. The path runs parallel to the road but is screened from it by trees and bushes: Oak, Ash, Rowan dripping with vibrant red berries, Alder with clusters of green, miniature bee’s-nest shaped fruits, Downey Birches with pendulous green fruits, Hawthorn with pitted red berries, Dogwoods, Sycamore and Field Maple.

In open areas, the lake and fishing platforms could be seen beyond fields of Common Reeds, Teasel, Great Willowherb and Docks. Running through this dense vegetation were Creeping Thistles, Common Ragwort, Nettles, Hedge Bindweed and Fleabane. Some of these plants were in flower but most were in seed. On the edges of the path, Common Knapweed, Red Clover, Burnet-saxifrage and Red Bartsia were growing. Mute Swans were swimming on the lake and Bees and Butterflies were flying all around. A Large White landed near-by. There were also lots of people sitting around the lake and on picnic tables which were dotted within the park.

After exiting the park we crossed the road at a roundabout and continued in an easterly direction. Before the sign for Pinewood Studios Wales and the Eastgate Business Park we took a right onto an old tow path. The grass had been recently cut leaving brown and pale patches; new delicate green blades were beginning to grow pushing their way through the thatch. On one-side of the path was a hedge of autumn splendour. There were fat, round Japanese Rose-hips, ovoid Dog-rose hips, plump bunches of Wayfaring berries and Haws, all in many shades of red. There were also Blackberries and black currant like berries of Dogwoods together with yellow seeds hanging in clusters from the Ashes. On the other side of the path was the canal; it was lined with Common Reeds and Bulrushes and a sprinkling of Teasel seed-heads and Prickly Sow-thistle. Some swathes of Ribwort Plantain were also present.

The canal was muddy but as the sun shone, lovely reflections could be seen in the water. In the shadier areas the surface was covered with algae. It was crossed by wooden bridges which allowed access to the hill on the other side. The whole canal area was alive with activity. Waterfowl were swimming in and out of the reeds: Gadwall, Mallards, Coots and Mute Swans. Flitting about were Dragonflies: a four-spot Chaser and loads of Blue Hawkers. There were people walking their dogs and enjoying the peace and quiet of the canal which was just metres away from a bustling industrial estate.

We followed the WCP signs onto an embankment overlooking the mouth of the River Severn. This was the Rhymney Great Wharf which ran flat and straight for miles towards the horizon; it had low-lying farmland to the left and salt marshes to the right. Along here there were some remnants of the relict seawall. Much of the surviving clay bank, located behind the modern seawall, may be from 1591 when it was built. Roman and medieval pottery have been found in the area.

At first glance the terrain looked featureless but I took a breath and focused on my surroundings. Looking back over my shoulder I could see the sprawling expanse of industrial Cardiff. Across the sea was Flat Holm and Steep Holm and the coast of North Somerset. 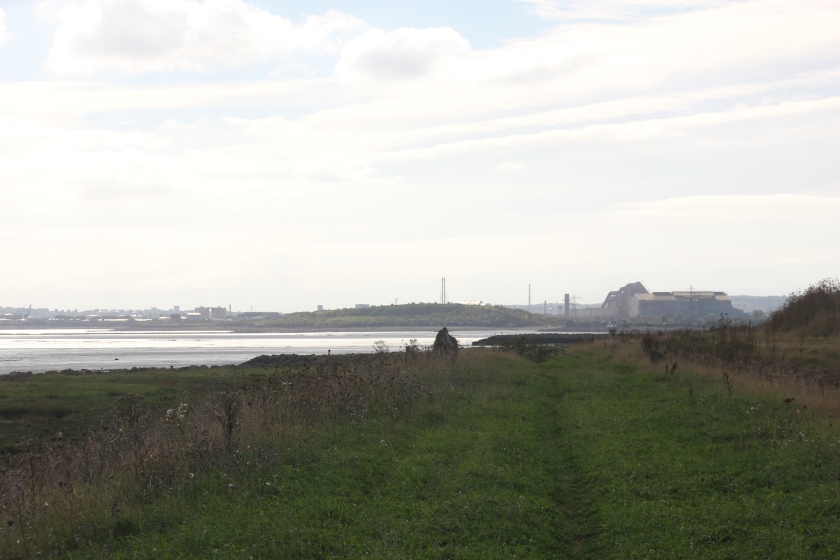 With the tide out there were huge stretches of mud covered with runnels and wave patterns. A red and white buoy was teetering in the mud and skeletal posts of old groynes stood to attention in parallel rows. Some looked as if they might have even been a walkway to Somerset. In fact the huge expanse of mud and the calmness of the water made us think that this was possible today. It was just an illusion though. In the haze, to the east, we could just make out the two Severn Bridge crossings further up the river. 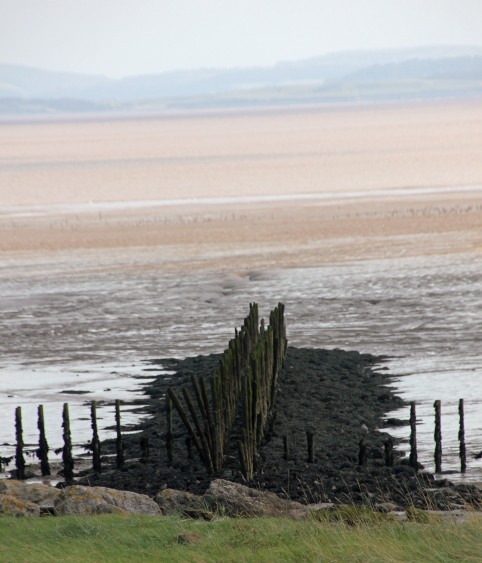 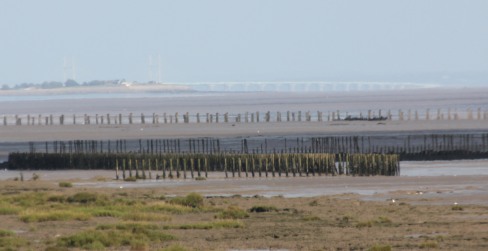 We had a spectacular view of a flock of Goldfinches acrobatically feeding on the teasels, noisily chatting to one another as they fed. They are such beautifully coloured birds. A few memorial stones, dedicated to wildfowlers and wild-life countrymen, also featured on the path.

We sat for a while with binoculars glued to our eyes watching Little Egrets, Grey Herons and Seagulls out on the salt marsh and mud flats. This area is noted for its wildfowl but although the tide was out we were unlucky not to see anything else. The closer we came to the posts the more they looked like fish-traps, but really I had no idea what they were.

The path narrowed as we entered the salt-flats proper. Grass, sedges and reeds were peppered with pockets of standing water; it looked like a very spongy affair. Some different types of flora were growing upon the banks: Red Goosefoot, Bristly Oxtongue, more Mayweed, Fleabane, Redshanks, Musk thistle and Black Nightshade. This last plant is similar to Bittersweet but flowers are white not purple and fruits are usually black not red; these fruits were green and had not turned black yet.

A concrete building rose out of the marshes but again I was bewildered as to its usage. There was a family with dogs walking around it; they didn’t go very far before they had to turn around because of the wet marsh. Wild Cabbages, Nettles, Brambles and Sea Beet, which were growing on the rocky slope of the seawall, were swarming with Large Whites. In land were a number of farms running alongside a small canal, Torwick Reen; the fields were full of horses in a myriad of shades.

There are a number of these “reens” in this area; they are canals or ditches specifically dug to prevent  flooding  and salt-marsh erosion. The path seemed to split into a high road and a low road. The low road was bordered by an avenue of Hawthorn trees. Here again were the chittering ,chattering Goldfinches but this time they had found a Hawthorn tree full of vibrant red berries to feed upon. There were also a couple of cheeky Magpies hopping around in the fields behind them. We stayed on the high road in order to observe the great span of the salt-marshes. 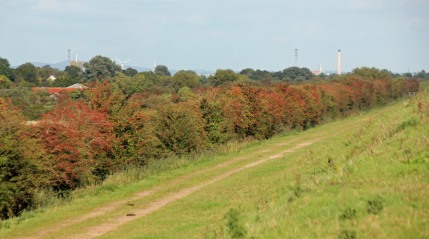 Out on the salt-marsh were driftwood monsters rising from the wet land. Also roaming freely were Long-horn Cattle, some lazing in the grass others paddling in the streams. Striding purposely towards us was a rather jolly character. He was obviously out for a stint of wildlife watching; he was decked out in shorts, a multi-pocketed jacket, an Aussie style hat- minus the corks-, walking poles and a pair of serious binoculars around his neck. We passed the time of day and he continued in the direction we had just come from. 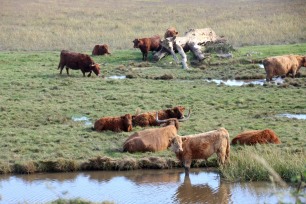 Further along we saw some lovely looking horses, grazing quietly but completely obstructing the path. We hoped they would move away as we approached. This was not the case and they stood their ground. There was nothing for it but for us to descend the steep bank onto the low road. This was when they decided to follow us. So we climbed back up the slope and regained the high road. 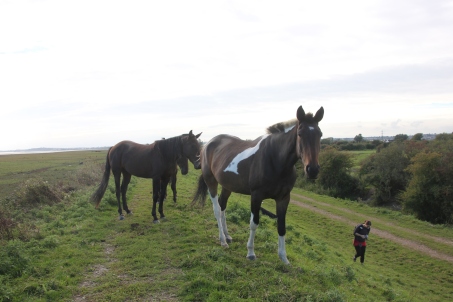 The Somerset coast was very close now. We felt as if we could almost touch it. Looking in land again we could see our destination St. Peter’s Church spire. However, we still needed to follow the WCP around the coast before turning left through a kissing gate and up a narrow path to the village of Peterstone Wentloog.

The church is no longer a practicing one but has been converted into an imposing manor house. Teasel, in flower, and Knotgrass inter-mingled with the fruit laden Hawthorn and  Brambles that formed hedges either side of us. We walked past the church/house then through a housing estate onto the main road and picked up our car in the Six Bells Inn car park.