On a lovely sunny day with very few, clouds in the sky, we were dropped off on a side

road in the village of Peterston Wentloog. Swallows greeted us with a fly past and House Sparrows chattered in the hedges. The track was lined with trees and flowers: Forget-me-nots, Buttercups, Ribwort Plantain Summer Snowflakes, Alexanders and Butterbur; Willow, Sycamore, Hawthorn and Blackthorn. The Hawthorn was in bud, but the Blackthorn was covered with starry white flowers. A Copper Beech was just producing delicate russet brown to wine red leaves: a spectacle amongst the greenery with an azure blue almost cloudless sky as a backdrop.

A narrow path led to the sea wall which was accessed via a kissing gate. Here there 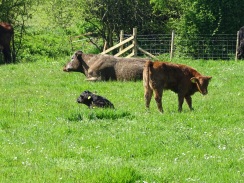 was a little shade where Nettles, Cow Parsley, Herb Robert and Common Vetch were growing under a canopy of Hawthorn and Blackthorn. Birds could be heard within the cover of leaves and branches. Over the hedge was a field of cattle with young calves, some suckling others snuggling up to their mothers. We crossed a small canal or reen which was weed choked. This reen ran parallel to the sea wall for the greater part of the walk. There are a number of these “reens” in this area; they are canals or ditches specifically dug to prevent flooding and salt-marsh erosion.

We gained the top of the sea wall where we were afforded stunning views of Somerset across the channel. In the Channel were Flat Holme and Steep Holme. Inland there were views of lowlands overshadowed by distant hills. 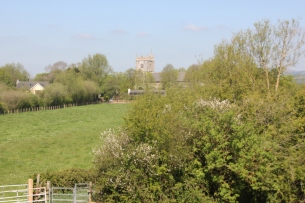 We also had a brilliant view of the church. St. Peter’s Church is now a private house though it still looks like an impressive 15th Century church. It is thought to have provided a refuge for the locals sheltering from the Bristol Channel Flood of 1607, when much of the Glamorgan coast was under water.

We had walked along most of Peterstone Great Wharf on a previous outing so were not surprised by the flat, almost straight track on top of the sea wall. Again, with the tide out there were stretches of mud covered by runnels and wave patterns but also fingers of grass-covered mud protruded into the water. As we made our way along the embankment we found very little in the way of flowers, mainly grasses, brambles and docks. Out on the salt marsh were several examples of drift wood architecture. 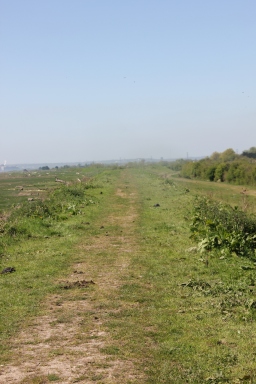 This area is known as the Wentloog Levels. It is an outstanding site for watching birds attracted to the rich feeding grounds of the saltmarsh and muddy tidal flats. In fact, we observed quite a few different species but by no means all that have been seen here. There were House Sparrows in the Brambles squabbling amongst each other and making a terrific racket. On the mud flats, water’s edge and in the water itself were Curlew, Mallards, Shelduck, Oystercatchers and Wheatear. These last were mainly on the rocks near the Gout. There were also several birds taking flight, while others swam between hummocks, and others left tracks in the mud. On one occasion a Curlew and a Shelduck walked or waddled across the mud in what looked like a procession.

House Sparrows in the hedges

Mallard in the mud 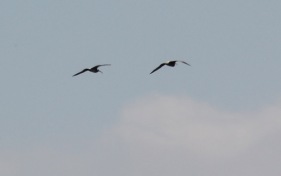 Curlew and Shellduck in Procession 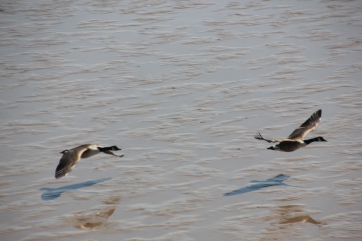 Tracks in the mud

We had manoeuvred many a stile or obstacle, like a herd of wild horses, before we reached the Gout at Peterstone and the flora became more plentiful: Bristley Oxtongue were emerging with no flowers evident; Daisies were littering the grass; patches of Dame’s Violet were attracting butterflies; Seabeet snuggled in between the rocks; dots of Dandelions were here and there. Just solitary Dandelions, unlike the masses of yellow pompoms, like carpets of sunshine, soon to be replaced by white fluffy fairy seed pompoms, that we saw on the road edges as we drove to our start point. 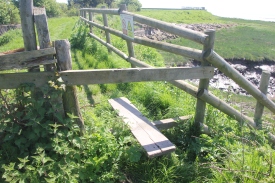 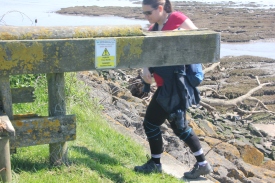 Craneflies and Bees and other insects crawled or flew or jumped amongst the grasses, while birds were flying, from the trees or perching on bushes or fences: a Magpie, a Carrion Crow, a Linnet and a Pied Wagtail. On a small lake, near the Gout, Swans and Shelduck were lazily quartering the water. Around the edges of the lake, flowers like Dame’s Violet were growing in profusion and were attracting a myriad of butterflies: Green-veined White, Small Whites and Small Tortoiseshells.

On the Gout itself Shelduck, Mallard and Curlew were swimming, resting on the banks or making tracks in the mud. The word “Gout” comes from the Old English word “gota” and Middle English “gote”, meaning watercourse, channel, drain or stream. The Peterstone Gout is a simple tidal flap system like that used by the Romans nearly 2000 years ago. Fresh water from the ditches and reens goes through the seawall at low tide via a flap and out to the sea. When the tide comes in, the incoming seawater pushes against the flap and closes it. The freshwater on the other side of the wall, much of it collecting in the afore mentioned lakes and reens, builds up until the tide turns and the whole process repeats itself. 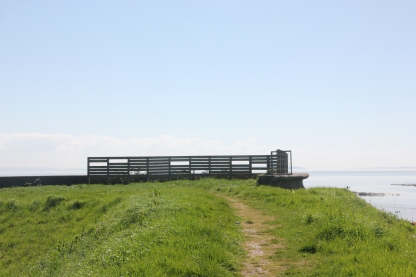 After the Gout came Peterstone Lakes Golf Course. Golfers were teeing off around a lake where Swans were majestically gliding. Hawthorns were fully in flower here and Buttercups and shoots of Rosebay Willowherb were growing. A bird hide located at end of the Gout afforded another panoramic view of the channel, Steep Holme, Flat Holme and the Somerset coast, although the sight was becoming hazier. In the opposite direction the top of church tower and a wind turbine could be seen over the trees. 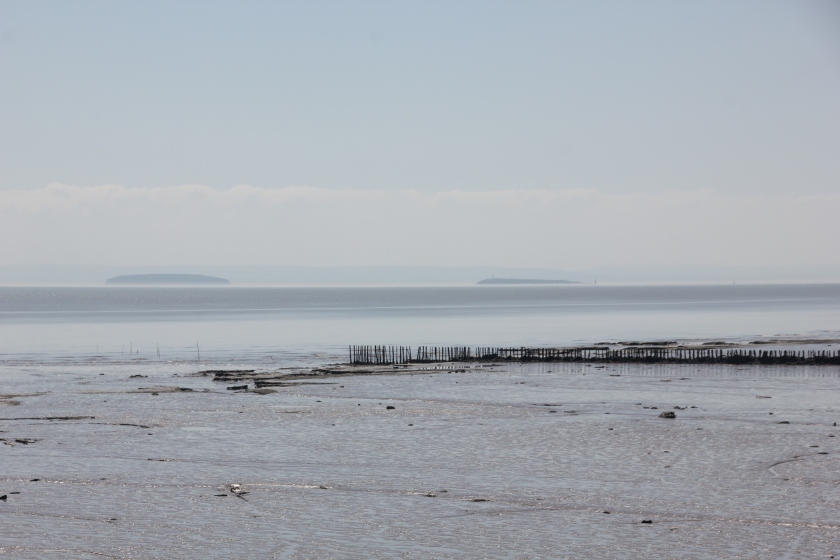 We sat a while eating sandwiches on a concrete sea wall. We gazed across the water over oozing mud where sea defences in the form of long lines of wooden posts were snaking into it. These were called groynes, from the Old French, meaning “snout”. Seaweed was strewn across the mud and the groynes, cascading from the sea defences like lava creeping over obstacles. A few Mallards were enjoying the little streams of water left in the mud by the receding tide. Canada Geese, which were grazing in a field opposite took flight and passed almost below our feet. Shelduck were resting on the mud and feeding in the seaweed, suddenly taking flight sweeping above our heads then finally coming back to rest on the mud. As they passed, honking as they did so, we could see their beautiful black, white, orange and green iridescent markings, a rather superior bird. Out of the mist in the channel a 3 masted Barque came serenely gliding past, it was quite surreal. Newport docks could, also, be seen through the haze. While fishermen, way out on the mud flats, were trying their luck. 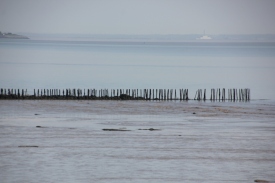 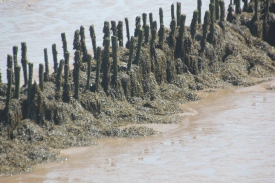 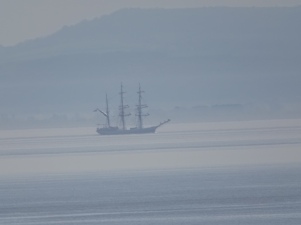 Reluctantly we moved on, but not before an errant Ladybird landed on my daughter’s sun glasses. Which she was wearing at the time.

Through trees and reeds, we saw a water park, where Swans, again, were majestically gliding 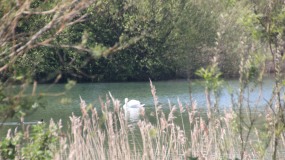 across its smooth waters accompanied by a pair of Mallards.

Again, fishermen are out in force, no doubt fresh water rather than sea angling. On the track were several Orange-tip butterflies, both male and female, chasing and dancing with each other but so fast it was difficult to capture them on camera. There were derelict buildings beside the path and in the distance wind turbines whirled, their great bulk rising from the ground high into the pristine blue sky.

The canal or reen which has been running parallel to the sea wall all along, now looked clearer and Swans, Mallards and Moorhens were happily swimming in it. Patches of flowering Comfrey, Watercress, Irises, Forget-me-nots, Nettles, Common Reeds and Docks were growing along its banks. They usefully camouflaged a pair of Swans, one of which was sitting on a nest. Here, Magpies and Collared Doves were perched in the trees above the canal.

A watering hole for us humans presented itself and we wholeheartedly accepted its invitation. We greedily imbibed a cool class of cider in the garden of the Lighthouse Inn, St. Brides. After a short sojourn we set off again, first crossing the little canal then on to the embankment. 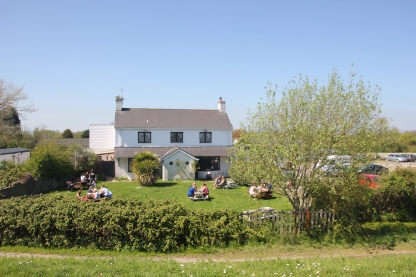 As we crossed the bridge a Mallard and her ducklings, twelve in total, glided past and took shelter in the overhanging vegetation.

After a while we descended to a dusty track much closer to the reen.  Again, swans

were present and to our surprise they were popping their heads above the grasses in the fields. Soon we came to the Old West Usk lighthouse. The lighthouse was built by James Walker and commissioned on 1 December 1821 and decommissioned in 1922. This modest lighthouse served vessels proceeding from the Bristol Channel to the Severn Estuary. James Walker succeeded Thomas Telford as the president of the Institute of Civil Engineers. Between 1825 and 1862 he acted as a consultant to Trinity House who were responsible for designing and constructing several lighthouses. The lighthouse was on its own island up until 1856 when the land around it was reclaimed. In 1989 Frank and Danielle Sheahan restored the lantern and opened the lighthouse as a hotel.

We were unable to cross the rivers Ebbw and Usk, so we followed the Ebbw upstream for a while as the track crossed some farm land. A reen was still evident on our left and it paralleled the road. Garlic Mustard vied with the Nettles, Cow Parsley and the new growth of Common Reeds along its banks. Orange-tip Butterflies and Green-veined Whites flitted frantically amongst them.  A lone Grey Heron stood still surveying a patch of clear water where small brown fish were swimming. Ready to catch a tasty meal no doubt. Wind turbines and industrial complexes could be seen across the river, and over the fields the Newport Transporter Bridge could be seen. We hope to cross this bridge on the next leg of our coastal walks.

Horsetails, Duckweed and red Water or Fairy Fern started to choke the reen. Although aesthetically pleasing to look at, it would in time spread and block the stream. Cows were gathering on the other side of the reen. They were very interested in us; we didn’t stay long just in case they decided to cross the reen.

We crossed a bridge over the railway tracks just as a sprinter train sped past, then we followed a short walk upon the main road, B4239, then over a wooden bridge to a path in dappled shade, running parallel to the road. We were very grateful for the cooling shade as the sun had been beating down on us throughout the walk.

Vegetation was completely different here: Sheep’s Sorrel, Bloody Crane’s-bill, Ground Ivy, Vetch, Bluebells, Brambles, Nettles, Thistles, Teasel and Bristly Oxtongue. The flora was enjoying growing in the shade as well. Eventually we reached our car in the leisure centre. Hot and very weary we made our way home.