I walk in a garden

And my soul lies back

My heart strings are pulled

By the scent of the breeze

Harlow Carr is a garden for all seasons. It is set in rural North Yorkshire about a mile or so from Harrogate. It is a garden to inspire the amateur gardener, the nature lovers, and the plant enthusiasts. The 58-acre site is laid out into several diverse areas of interest, herbaceous borders, wildflower meadows, kitchen and scented gardens, an alpine zone, woodland and streamside walks and a teaching garden.

We began our tour in the teaching garden with its pond area and dry gravel area. In and around the pond were pure white spathes of Arum Lilies, pink spires of Water Hyacinth, billowy yellow Flag Irises, beautiful serene Water Lilies, flower spikes of Fiipendula purpurea just emerging and the gigantic stems and leaves, like elephants’ ears, of the stately Gunnera manicata. In the dry garden were lots of different grasses, Catmint and Sea Hollies. All the plants and gravel were buzzing and crawling with insects, spiders, ladybirds, wasps, and bees. Everywhere you looked there was a creepy crawly.

The pond with the learning centre in the background.

Planting in the gravel area.

In the learning centre were a myriad of horticultural books and planting demonstrations. There was also an exhibition of embroidery which depicted the gardens landscapes. 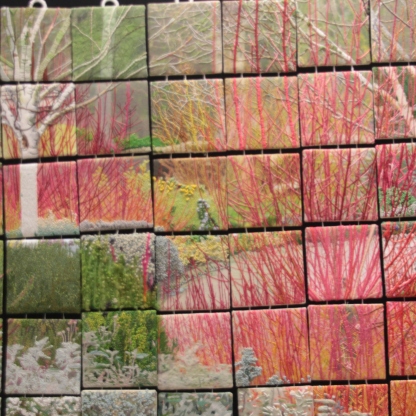 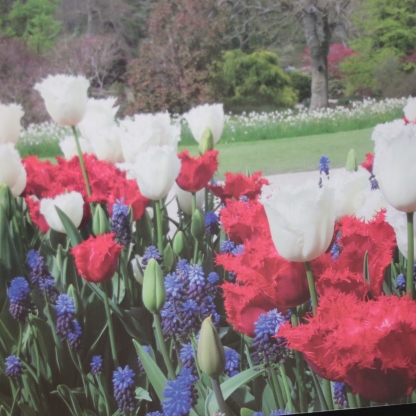 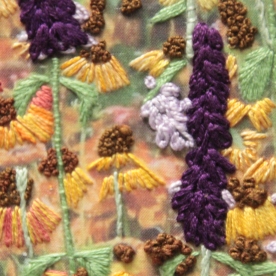 The path meandered past a small lake “ The Queen Mother’s Lake” which was covered with Water Lily pads and Frog bit. Heavy plantings of Flag Iris, Flowering Rush, Marsh Marigolds and Dog Daisies  grew on an island in and around the lake. 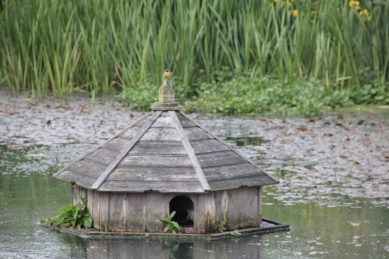 In the middle was a thatched bird house on which a Grey Wagtail had perched. Wagging its tail for all its worth. Enchanting! Moorhens and Mallards were wading through the Water lilies to reach clear water.

The lakeside gardens were up next. All were featured in the television series “ Gardens through Time”. Here were exhibition gardens featuring quite a bit of hard landscaping. Insects made an appearance in their masses: bees, ladybirds, damsel, and dragonflies. Planting was different in each of the gardens showcasing Shrubs, Roses, Grasses, Ferns,  Perennials and small trees. Each in its own garden setting. The Garden of Contrasts reflect Gertrude Jekyll’s consideration of colour and texture.

A Garden of Contrasts

Takes features from historical gardens with a contemporary twist with modern materials, creating a low-maintenance space. 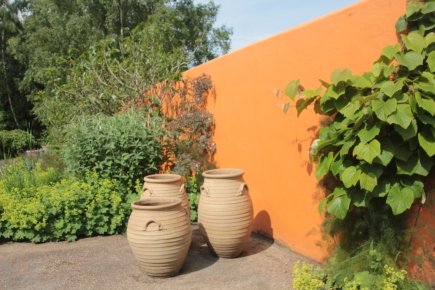 The garden features a simple patio softened by foliage and silver birches, which add height and structure.

At the other end of the lake the path skirted the South Field and passed under single Willows, Silver Birches, Oaks and Beeches.

Before entering the Woodland area proper, the trees were in greater numbers and were joined by an under storey of shrubs, ferns, and bulbs. Rhododendrons, Magnolias, Azaleas and Cherry Trees featured strongly. The woodland paths wandered hither and thither; around every corner there was a photogenic vista. It seemed like a fairy-tale land.

Among the trees , children were entertained with giant sculptures made of Willow, wood and stone. We found the Lochness Monster here standing over and protecting a stone hump-back bridge. While the BFG (Big Friendly Giant) stood surveying the children’s play area. Extremely tall carved wooden totem poles, willow work dinosaurs, squat stone trolls, statuesque stone columns guarded by fierce stone lions confronted you as you meandered down small trails under the dappled shade of the majestic trees. Dotted throughout the understorey were bright patches of red, pink, white  and purple flowers. Jewels piercing the myriad hues of green. 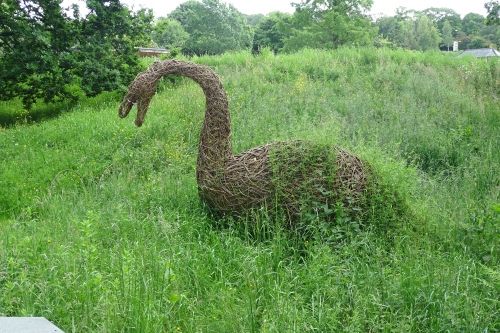 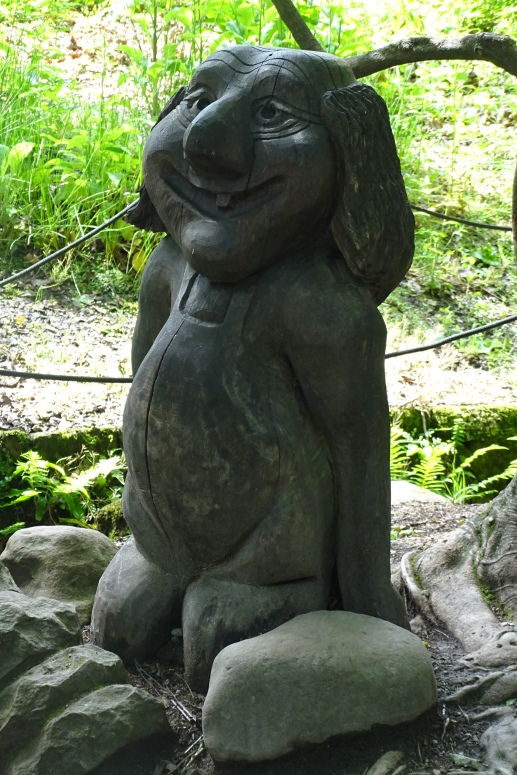 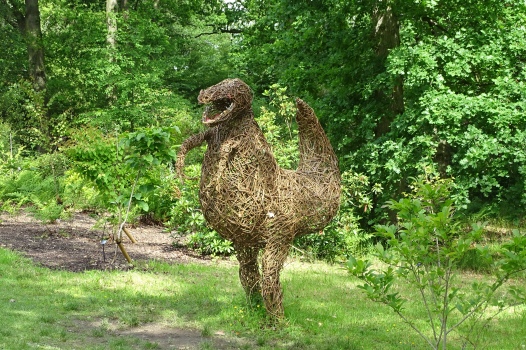 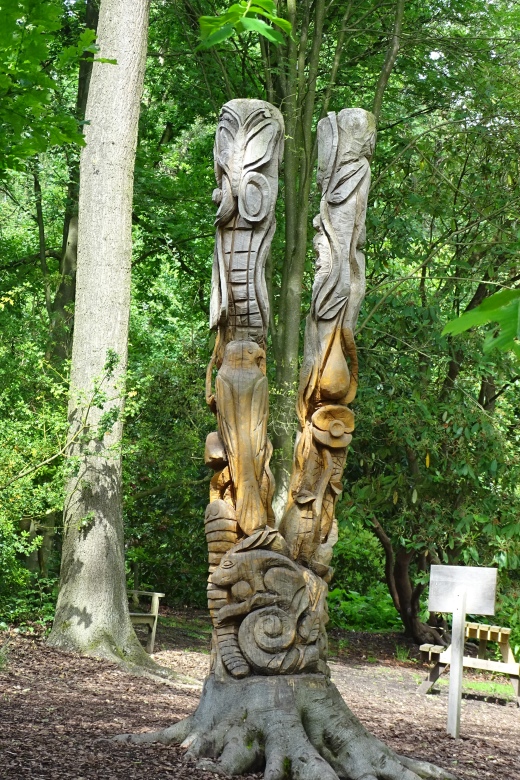 As you stood still or sat on a bench in a secluded part of the wood you could hear bird song, and if we were really lucky, we would catch a glimpse of Robins, Blackbirds, Sparrows, Finches and Pigeons.

As we emerged from the dappled shade of the woodland, we entered a rockery area and nestled on its outskirts was BETTY’S TEA HOUSE. (A subsidiary of the world – famous Betty’s Tea Rooms in Harrogate). We were just ready for a cream tea, scones with lashings of cream and jam, finger sandwiches, little cakes, and a pot of English Tea. Divine! The bustle and chatter of people enjoying a welcome rest and the chink of the china teacups was delightful. Discussions about the planting and lay out of the gardens was prevalent among the conversations around us. Conversations which we enthusiastically joined.

After refreshments we followed the paths leading towards the Kitchen Garden where all manner of vegetables, fruit and fruit trees were laid out in serried ranks and raised beds. I only wished my allotment looked so pristine. Then onto the scented and foliage gardens passing through meadows of grasses, from small to gigantic, which were punctuated with splashes of colour supplied by tall purple Alliums and Salvias, orange and yellow Welsh Poppies and frothy, candy floss blooms of Butterfly Stonecrop. In amongst all this abundance of flora rose an unusual windmill whose arms were giant Sycamore seed pods.

The scented garden was an olfactory delight with Roses, Dianthus, Peonies, Phlox, Buddleia and Jasmine all vying for space in the small confines of the garden which was contained within Privet Hedges. There were quiet little spaces where you could rest and watch the people pass by listening to their “ooos and ahhhs” as they commented upon the scents and sights.

Next up for our perusal was the alpine zone in and around a large conservatory. Outside were sinks and rocks covered with alpines grouped together with different textures and colours forming a harmonious blend of landscapes. Inside the plants were individually spaced to show their jewel like beauty: flowers of exquisite form and colour, dainty leaves of varying shapes, all exhibited among stones and gravel. There were Saxifrages, Sempervivums, Campanulas and many more gems which I had never heard of. 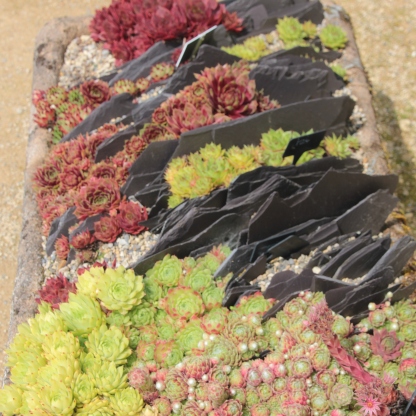 It was a glorious day, the sun shone and the breeze was light. We were coming to the end of our tour. Just the streamside walk to complete. I think we left the best to last. A riot of colour, plants of all shapes and sizes, all accompanied by the tinkling sound of running water in the stream. Several varieties of Primulas in lovely pastel colours, numerous Irises in hues from delicate white, through yellow and blue to deepest purple, starry Astrantias, lush Hostas, Ferns and Gunneras grew on each side of the path and along the stream. Stone bridges crossed the stream at various places allowing visitors to view the landscape from every angle. 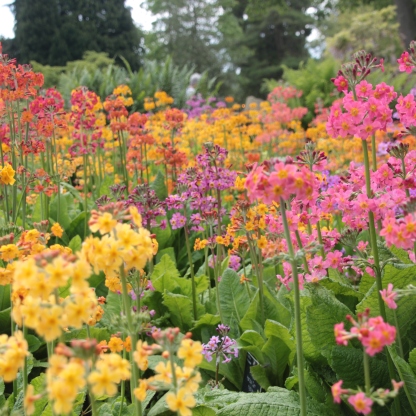 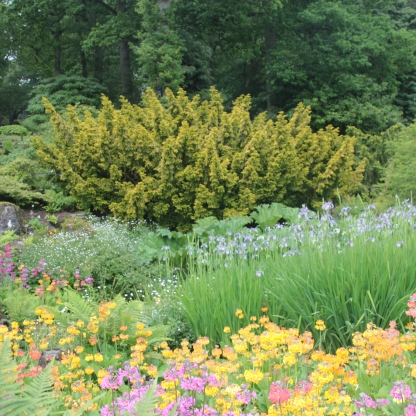 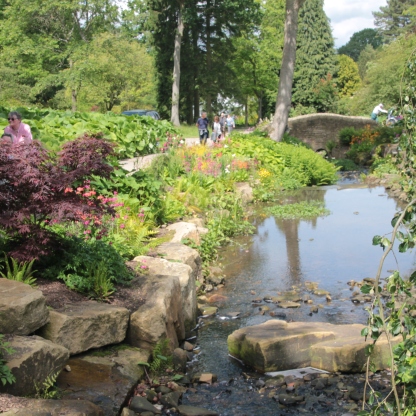 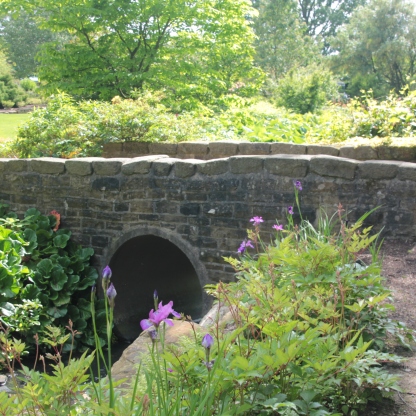 The poem among the Primulas dedicated to Geoffrey Smith reads:

The kiss of the sun for pardon,

The song of the birds for mirth,

One is nearer God’s heart in the garden

Than anywhere else on earth.

We crossed the last bridge, arriving near the Lochness monster and made our way to the exit. Passing quickly through the gift and plant shop, perusing but resisting to buy too much.

Many of the plants we observed are collated in the Photo Gallery.