My daughter and I are dropped off at the Maritime Quarter in front of the Arethusa Apartments. There is a Relief and a Plaque on either side of the arch – dedicated to the 156 men aboard the ship HMS Arethusa who lost their lives in 1942, relieving the siege of Malta. The frigate HMS Arethusa was paid for and adopted by the people of Swansea in 1941. 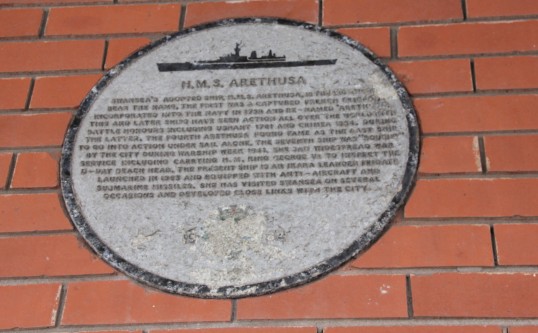 Through the arch is the Marina and on the right is the Meridian Tower. This is Wales’ tallest building, 107 metres tall and completed in 2009 with 29 storeys and a penthouse

restaurant called the Olive and Grape. The restaurant has panoramic views over the city, the Bristol Channel and the Brecon Beacons. A siege took place here in August 2014 but the outcome was harmonious.

Outside the Meridian Tower we climb the twisty steps, with disabled access, to the water front. The whole expanse of Swansea bay is arrayed before us, Port Talbot and the looming presence of TATA steel to the left and our destination The Mumbles and all points in between to the right. People are walking and playing on the beach and Promenade. Yachts are sailing in the Bay. 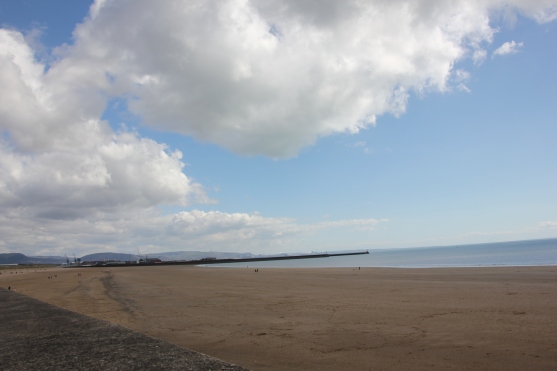 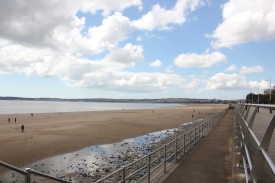 As we walk along the Promenade, we pass the civic centre with the Guildhall in the distance. It has a Mediterranean feel to it. The plants look tropical, the sun is shining and the sky is blue. Lots of the plants are just coming into bud but others are fully established: Yucca, Escallonia, Tamarix, Pines, Maram-grass, Cordylines, Roses and Pampas -grass. The grassy patches have Daisies, Dandelions, Groundsel, Ribwort Plantain and Sea Beet. The sandy patches have Sedum, Hebe, stumpy Escallonia, Phormiums and even the odd Bluebell.  There are plenty of benches along here; many of them are in memoriam. The backdrop is of the regimented rows of houses in Penlan and the Uplands. 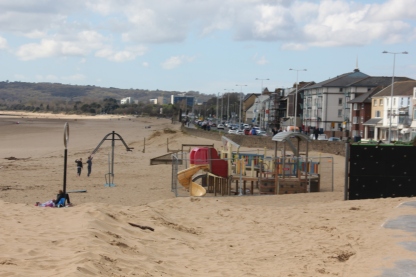 Sand has blown onto the path just as a children’s play area and the A4067, Oystermouth Road, come into view. The Promenade is right next to the road and care needs to be taken as there are no barriers separating them. We go down some steps on to the sand, where people are having barbeques, running and playing. Sara and I stop to collect some of the more interesting shells that are lying on top of the sand.

Bridge as it is now

We pass the remains of one of the bridges that cross Oystermouth road; it is cordoned off and doesn’t look very safe. The bridge once crossed the roadway, the LMS railway and the Mumbles railway before being partly demolished in the 1960’s. Just behind it you can see St. Helens, home to Swansea Rugby Club. I have seen a number of rugby matches here and pop concerts, but that was years ago.

We gain access to the Promenade again at the Beach and Water Sports Centre 360.

Our boots are full of sand. If there is something I hate, that is sand between my toes when I am walking. So we stop get comfortable and take on some food and drink. Mmm… bacon roll, sweet potato chips and a bottle of Fanta. Sitting outside the cafe we watch the games on the beach and eat our lunch. The plants around this area include Rock Samphire, Flowering Currant, Sea Holly, Groundsel and Forsythia. In the distance is the Mumbles headland with the Lighthouse clearly visible on one of the islands, Mumbles Village, West Cross and Blackpill. The Mumbles still seems a long way off but we are now fortified and ready for the challenge.

All along the path are exercise equipment – the trim trail 1 and 2 – I am not even contemplating having a go; Sara might but she is younger and fitter than I. I will leave it to your imagination as to which upper or lower body muscle group benefits from their use. We pass the war memorial and walk over a black iron bridge, which has semi-circular arches, on to the path which is very close to the main road. Singleton Park, Swansea University, the Taliesin Centre and Singleton Hospital are on the opposite side of the road. Brightly coloured flags on the lamp-posts announce  “ Joio Bae Abertawe” “Enjoy Swansea Bay”.

Swansea University is the Alma Mater of both myself and my daughter, but our stay there was many years apart. The Taliesin Centre is a building for the Arts; it was opened in 1984 and named after the 6th century Celtic bard. It hosts a broad programme of events: cinema, exhibitions, a variety of live performances from dance, drama to jazz.

The path now doubles as a cycle track, pedestrians one side and bicycles the other. Well that’s the theory anyway.

You can just imagine it at high season: bells ringing, people screaming and jumping out of the way, cycles avoiding people who are talking and enjoying their ramble but paying no heed to the well sign posted demarcations on the path. A little of this furore is taking place in front of us. It is very pleasant along this tree lined route and as we look around taking in the ambience, I find myself veering across the line. There is another obstacle to contend with during the Summer months: the Land Train.

Thankfully we do not need to worry at this time of year. The trees are in full Spring swing with buds cracking open and displaying their fragile leaves: curtains of yellow catkins together with orange-brown oval buds in pale yellow clusters forming the emergent yellow  leaves of the Oaks, pink buds with amber leaves like little umbrellas of the Sycamores, heart shaped green leaves and long red-brown catkins of the Poplars, Pines with their tapered cones and upright creamy orange flowers, Larches with their round scaly cones and pale green leaves and Beech leaves squeezing out of knobbly pink tinged buds. Some of the tree trunks are spattered with Moss and Lichen; large roots are snaking their way across the grassed areas. Up in the bare branches are a few Magpies, surveying the traffic below them. Running through and beneath this array of trunks and branches is a myriad of plants: Herb Robert, Honeysuckle, Ivy, Celandines, Ground Elder, and Irises. Benches are strategically placed along the route providing windows onto views of Swansea Bay.

As we reach Blackpill the path veers to the left into an area known as a Site of Special Scientific Interest (SSSI). The Wildlife Centre is somewhere in the vicinity. We cross a bridge over a stream where Mallards, Pigeons and Gulls are swimming and quenching their thirsts. The play park outside The Junction Cafe is packed with people; a party atmosphere pervades the area with barbeques and picnics taking place.

The Junction is the site of Blackpill Halt which was part of the Swansea and Mumbles railway system. There are a number of old posters chronicling the life of the Swansea and Mumbles Railway on the walls of the Junction. It was built in 1804 to move limestone from the quarries in the area to Swansea and markets beyond. It carried the world’s first fare-paying railway passengers in March 1807. I travelled on it with my grand-parents before its closure in 1960. At the time it had been the world’s longest serving railway and it still holds the record for the highest number of forms of traction of any railway in the world: horse-drawn, sail power, steam power, electric power, petrol and diesel. 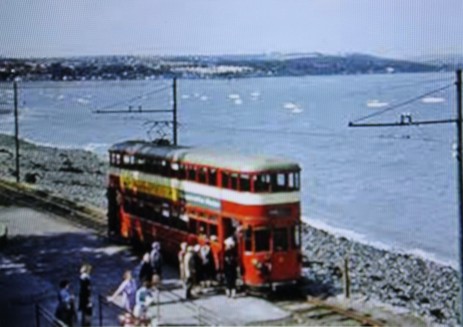 On the coast side of the path is a large steel sculpture of a bird; it is a sound sculpture 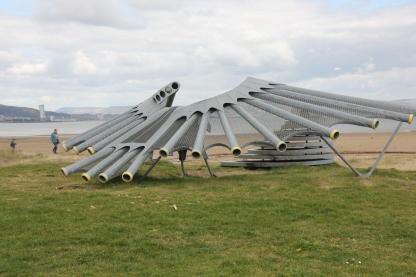 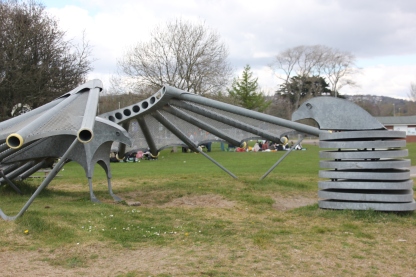 entitled The Musical Osprey. It sounds delightful when I hit it but to those around me it probably is not very musical. Just beyond, near the water’s edge are about 50 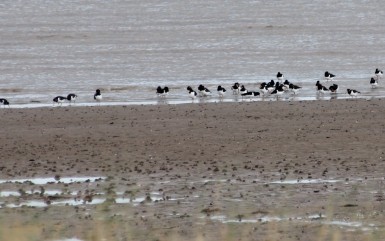 Oystercatchers, probing the wet sand for tiny morsels. Along this stretch short seaside grasses and Marram-grass are accompanied by Daisies, Clover, Biting Stonecrop, Black Mustard and Dandelions, while cheeky birds peck and saunter about: Pied Wagtails, Jackdaws and Magpies. The brightly coloured houses in Mumbles village are getting ever closer as we pass the Woodman and West Cross Inn, both of which have produced some very fine meals for me and my family in the past. Mumbles Pier, the Light-house and the old Life-boat station are also tantalisingly close. However, there is some way to go yet before we reach our goal. 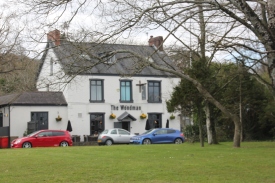 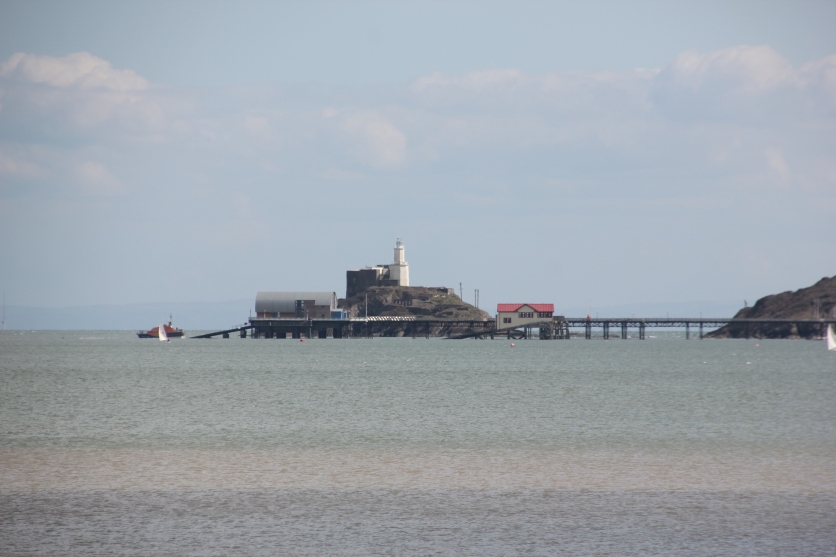 The path goes on! The sea wall looks rather shabby as concrete and rocks are piled high to allay the encroaching tides. Many plants have taken root among the crevices: Rock Samphire, Yarrow, and Sea Lavender. Banks of Butterbur, Ivy, Brambles, Ferns and Trees shelter the path and visitors, walkers and cyclists, from the urbanisation beyond the road. Banks of Seaweed and flotsam are strewn along the water’s edge, some of which has been thrown up onto the path during recent high tides. Then from the air Seagulls and Pigeons interact with anyone or anything along the route.

We pass cafes, lovely holiday homes, a residential area, and new builds – Oyster Wharf-, the village Lane Boat Park, the Water-ski club and many boats out of the water.

Looking back across the bay we see TATA steel on the far shore, still polluting the air with smoke. But for how much longer as the future of the company seems so uncertain? As we lean on the railings looking out into the bay, we witness a commotion taking place on the slipway. Picture this: Wife reverses the car with a jet-ski down the slipway, the car hits the water and the jet-ski is out of position. Husband races out of the water, shouting and screaming, and takes over. The car goes back up then down the slipway and the jet-ski is repositioned. He leaves the car in the water and races off on the jet-ski. Wife left to fend for herself. We move on chuckling to ourselves. 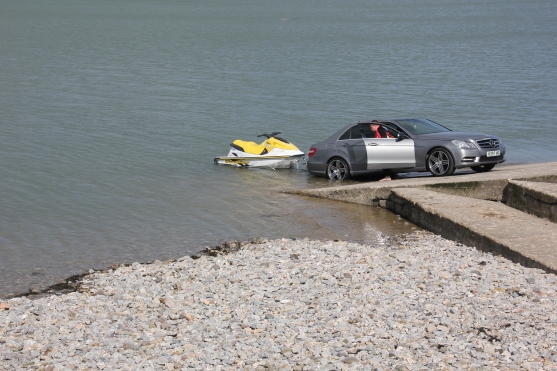 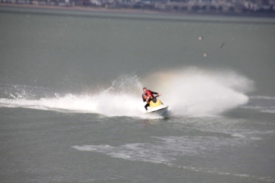 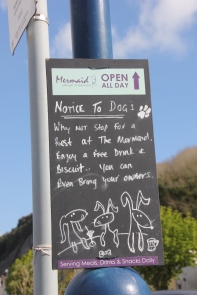 Another chuckle escapes our lips when a sign for The Mermaid catches our eye.

An intriguing capstan with compass directions and places of 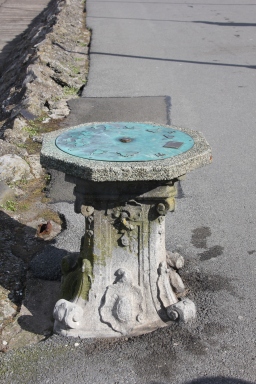 Our destination is just a few steps away: Knab Rock and Verdi’s, a long established restaurant and ice-cream parlour. Bring on the ice-creams! 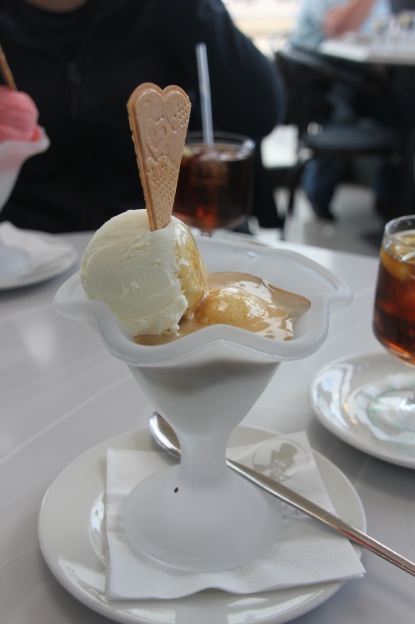