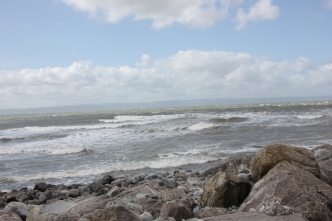 A lovely sunny day but very breezy my daughter and I set out to tackle the next leg of the Coastal Path. We retrace my steps on the previous walk to Llantwit Beach, via Cwm Colhuw valley. The tide is in so there is no way we will be crossing the beach, to explore the rock pools and caves, today. The wind is whipping the waves into a frenzy as they crash upon the shore. Skirting the cafe, although I am tempted to start off with a cup of coffee and a bacon roll, we climb the cliffs to the top. The path is concrete with steps and hand rails. A number of years ago this was a slippery uneven climb but thanks to the Wales Coastal Path project this is now a safe route. There is a seat strategically placed at the top with a fine view of the beach and its environs. Hedge Bedstraw (Gallium mollugo ) and Hemp Agrimony (Eupatorium cannabinum ) neither of which is in flower are nearby. Continuing along the cliff top on a rough path through hedges of Sloe, Gorse and Brambles all covered with writhing tendrils of Traveller’s Joy and Bittersweet (Solanum dulcamara ) until we come to a stone stile, easily mountable or even by-passable. We soon burst out to the open cliff top; it is really wild and very windy. The grasses and flowers are being blown this way and thither. The westerly wind is certainly making walking quite strenuous. The grasses are punctuated by drifts of pale pink Thrift (Armenia maritime), Spear Thistle (Cirsium palustre) and Bird’s-foot-trefoil. We do not go too close to the edge but you can clearly see and hear the sea lapping against the cliff.

There are a number of Pill-boxes dotted along the cliff part of the WW11 coastal defences.  We stop a while here to leave a large contingent of ramblers to pass. They are travelling in the same direction as us but at a much faster pace. 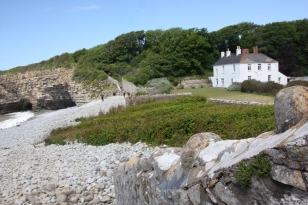 Eventually we descend some steps into Tresilian Bay. There is a lovely house here facing the sea but it is all private ground except the path which crosses the pebbly beach to the steps at the other side. Some Japanese Knotweed (Fallopia japonica)has taken hold along the wall around the grounds of the house. Again a Pill-box is situated at the base of these steps. At the side of the steps and in front of the house are pale pink Dog Roses rambling amongst the pebbles. As we climb the steps, Rock Samphire, and a Sea Beet (Bea vulgaris ssp. maritima) cling to the walls.  Again another stone seat is strategically placed half way up the climb to the cliff top with a flowerless, tall Bristly Oxtongue (Picris echiodes) beside it. Brambles and Ivy on the side of the path are buzzing with insects: Leafhoppers ( Cicadellidae), Flies and Wasps (Vespidae). 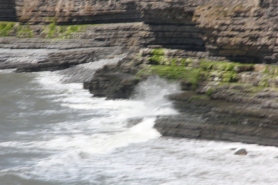 The cliff has been eroded and the path has been diverted through a hole in the dry stone wall into a field. The route passes through meadow land where Common Blue butterflies are flitting and a number of birds can be heard amongst the long grass but no sight of them. The spectacular shelved seaweed strewn cliffs are just below us, the waves crashing upon them. Blue grasses (Festuca) are seen colonising ants’ (Formicidae) nests, or is that the other way around, and some Hedgerow Crane’s-bill (Geranium pyrenaicum) flowers are also seen beside the path.

The path veers to the right; to the left and you drop over the cliff, nasty. This is part of the Heritage Trail which leads straight on into St.Donats. The Coastal path soon turns left through a kissing gate into the mixed deciduous woods, Barracks Wood. Less wind and more shade in here as the path meanders through the wood. There are convenient rough wooden seats and logs for you to rest upon or take a snack or drink, which we did. A good number of shade loving plants are scattered through the trees: the last remnants of Bluebells stalks standing erect with their seed nodules bulging amongst the Male Ferns and Hart’s- tongue Ferns, the Red Campion are also setting seed. Ivy snakes through the vegetation and up the trunks of the trees. Snowberry bushes (Symphoricarpus albus) line the path. The wood is full of Sycamore, Ash ( Fraxinus excelsior), Elder, Hawthorn, Hazel, Beech (Fagus sylvatica ), the occasional Oak (Quercus robur ) and one or two Horse-chestnut (Aesculus hippocastanum ) trees, all forming a delightful shady canopy; the sunlight bursting through onto the woodland floor and highlighting the flowers of Daisies, Red Campion and Buttercups, which are also setting their round spiky seed heads. At the edges of the wood the Oaks are standing majestically alone, the Horse-chestnuts, with their unfurled palmate leaves looking like floppy hands, are surmounted by white erectile pyramidal flowers. However, disappointingly, there are clumps of Himalayan Balsam (Impatiens glandulifera ) just emerging in a number of areas under the canopy. 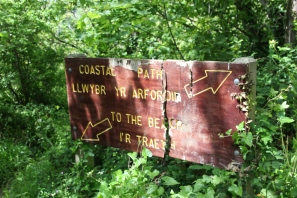 Path. As we came to the end of the wood a view of St. Donat’s Castle can be seen in the distance. 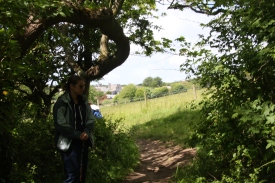 The path between the hedges leads down to the beach in front of the Castle walls. HolyMats of Scarlet Pimpernel ( Anagallis arvensis)run along-side the path vying for room with newly erupting Teasel and Common Vetch. A Speckled Wood butterfly flutters between the hedges alighting now and then upon a sunlit spray of leaves. 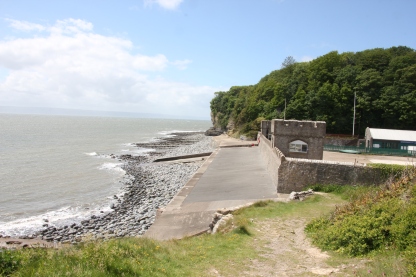 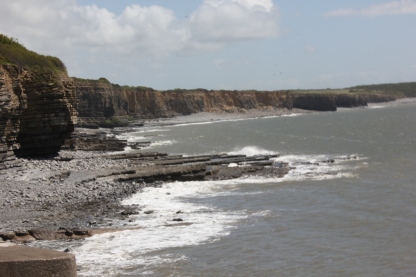 At St. Donat’s bay the crenellations upon the castle wall tower overhead, this area is a dock of sorts and the slipway for the lifeboat which used to be housed here all have to be traversed. The Lifeboat Station here was run from 1963 to 2013 when the RNLI withdrew the lifeboat. St. Donat’s Castle walls are 13th century, built by the Stradling Family. The Castle has had various owners but notable of them was the newspaper tycoon William Randolph Hearst who bought it in 1925 and carried out extensive renovations. He was renowned for entertaining influential people and celebrities on the estate. The castle has housed Atlantic College, an international sixth form college, since 1962, one of the United World Colleges. The tithe barn in the grounds now is the site of St. Donat’s Art Centre, which provides a varied programme of cinema, exhibitions, festivals and live entertainment in its well equipped theatre. 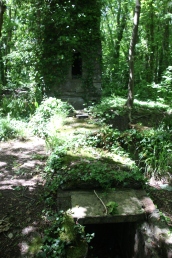 From the Bay we ascend into the trees again where a similar picture of flora awaits us; I notice that the Cleavers have started to flower. However, there are the remains of the Cavalry Barracks with its water culverts which are overgrown with Ivy. It is pleasant walking among the trees and in the shade as the sun was quite warm on our backs when we were in the open. 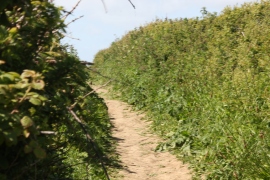 The walk continues on paths between hedges and through fields with glimpses of the flat tessellated rocks below the cliff. Bumble bees and Large White Butterflies jostle for landing pads upon the flower heads. As the path opens out the lighthouse and foghorn station are visible. Grasses splay out over the path, accompanied by Hogweed just unfurling its leaves. Again insects are present, a particularly lurid red one is spotted, it is definitely not a Ladybug but it could be a Seed bug (Lygaeidae ).There are a number of stiles and gates to go over or through. Upon one of the stiles we see a caterpillar or an inchworm, Magpie Moth (Abraxas grassulariata ), with its peculiar loop-forming movement, resulting from the absence of legs in the middle portion of its body. It looks like “The Very Hungry Caterpillar” from the book I read to my kids. 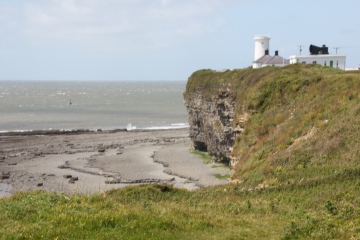 Walking on past the lighthouse, which has a wedding taking place there today, so no entry to the building except on wedding business, and on past the foghorn station. There is an interesting sea based wreath on the entrance gate to Nash Point Lighthouse and a notice 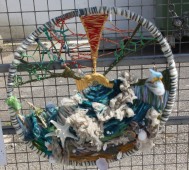 saying the foghorn will sound to commemorate the ceremony. The foghorn was decommissioned in 1990 but restoration of the 1865 machinery took place from 2002 to 2006. It is now one of only a few in working condition in the UK.

At the car park entrance, (there is a fee payable in the summer months) there are notice boards informing visitors of the likely flora and fauna to be found in the vicinity. The cove is said to have been a looting station for pirates in the 18th Century. Taking the path down toward Nash Point Bay, but not onto the beach, we veered right into the Nature Reserve. A stream winds its way through the dappled shade of the wooded area and it is forded by stepping stones throughout the wood. There is Watercress in the stream 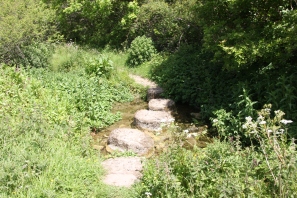 and tadpoles in the quieter parts together with Water Boatmen skittering over them. In the distance you can hear the clanging of a bell. That would be the buoy just off Nash Point marking the eastern end of Nash Sands – a two-third mile wide and ten mile long sandbank in the Bristol Channel. Further into the reserve there are patches of Greater Water-moss ( Fontinalis antipyretica)in the water and Overleaf Pellia  (Pellia epiphylla )a liverwort covering the stones in the streams. There are a number of Large White and Peacock Butterflies flying around in the areas where shafts of light are penetrating the leaf canopy. In the shade is a great proliferation of a various ferns. 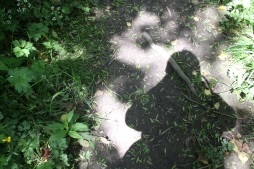 The path is littered with the fruiting seed pods of the Ash trees which have blown down in this windy weather: a carpet of miniature emerald surf boards. Also upon the trunks of some of the Ash trees are King Alfred’s Cake fungi (Daldinia concentrica ). Some tufted, branching  Lichen are also clinging to the trees. 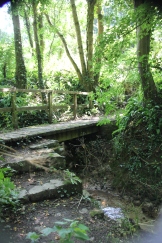 At the end of the wood we crossed a wooden bridge and ascended an incline to the road. Following the road we passed the medieval Holy Trinity Church towards Marcross and the Pub, The Horseshoes Inn. The Church is dated from the 12th century but has undergone a number of additions and restorations in the 14th and 19th centuries, the largest one being in 1893 when many parts were renewed. 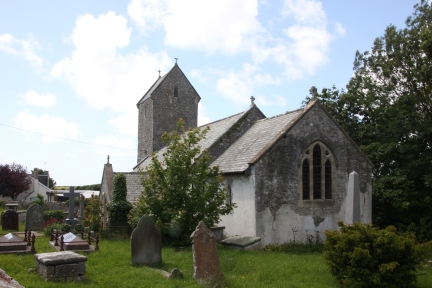 A few rough patches of land sported red Poppies (Papaver rhoeas ) and the dry stone walls which line one side of the road have Navelwort (Umbilicus rupestris ), with its coin shaped leaves, growing out of them. In an open fronted garden there was a lop-eared rabbit looking at us. He did not seem perturbed when we approached and started a conversation with him; he just ignored us.  The pub, The Horseshoe Inn, beckoned us so we strode swiftly on in its direction. There were a number of nests in its eaves. These were mainly house Sparrows, and one of them looked like an albino sparrow. In the porch was a Swallows’ nest with chicks squeaking asking to be fed. Try as I might I was not quick enough to catch the parents feeding them, although I saw them coming in and out on a few occasions. Lovely meal washed down with a glass of Taffy Apple Cider. What a wonderful day again. The weather although windy stayed warm and sunny throughout.

The Horseshoe Inn was built in the nineteenth century by the Radcliffe family, the pub has been serving the local farming community for well over a century. 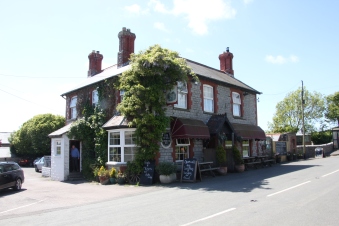 The 303 bus was caught just outside the pub. Stick your arm out when you see it and hope it will stop, that’s country bus travelling. We pass the fields where WW11 camps for Italian prisoners of war were interned. The bus winds its way along the lanes through St. Donats and back to Llantwit Major.