Walk all along the coast

Much later than usual, around 3:00 pm., I alighted the bus and walked from Fontygary Road in Rhoose to the leisure centre. This was a peculiar bus journey as I had to change buses; a Cardiff Bus to a NAT bus, which partly followed the journey I had just made but in the opposite direction. Oh well, if I had timed my trip better I probably could have travelled more directly with no change of bus.

There was quite a gathering at the Life Guards hut where people were getting ready for a surf canoe charity run up the coast. I wished them good luck and went on my way, clambering over the equipment they had laid out all over the steps leading to the cliff top. Up the steps and over a stile into the caravan park, which is quite substantial, the path led around the holiday homes; caravans to the right and the sea to the left. The actual cliff path was washed away a few years ago during severe weather conditions together with a substantial part of the cliff and the caravans swayed precariously on the brink narrowly escaping tumbling into the sea. Owners live the high life on the cliff top overlooking a pebbly beach strewn with drift wood. Further into the park the views now encompass the salt water lagoons and marshes of Andrew’s Pant. In the distance you can see the sea wall which encloses the now semi-fresh water lagoon, nature reserve and the ruins of the lime works. The lime works opened in 1888 and closed in 1926. It is a listed building and some restoration of the building has taken place mainly to make the structure safe. 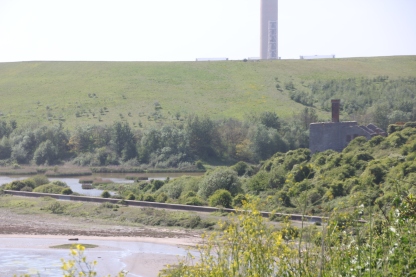 Out of the park, over a stile and down some steps, which were in a state of disrepair. So I took it carefully and tried not to slip. This was more like the nature ramble I wanted. The usual gulls and jackdaws with a few sparrows and swallows flying overhead, the bank on the side of the path brimming with newly emerging vegetation and the railway line running parallel to it. There are Comfrey, Brambles, Nettles ,Cow parsley, Gorse and  Hawthorn bushes. Nestling between them are Vetch, Celendines, Bird’s- foot- trefoil, Dog Roses ( Rosa canina)and cheerful Daisies (Bellis perennis).The path makes a switch back to the left; the right hand path leads back onto the main road at Aberthaw, and continues down to the beach at Andrew’s Pant. Ivy clad wooden railings help to make the passage a little easier.  The Rosebay Willowherb (Chamerion angutifolium) is just emerging. I know this plant as Fire Flower, but no flower buds are yet to be seen. Also along here are Foxgloves (Digitalis purpurea), just leaves and some flower spikes, and the purple Hounds-tongue (Cynoglossum officinale). At the bottom of the steps are Elder (Sambucus nigra) bushes just coming into flower.  As I look back up the slope I can see Traveller’s Joy, joyfully spreading its tendrils over everything in sight, what a spectacle this will be when it bursts into flower and also at season’s end when its spidery tassels will clothe all the branches and bushes. At the beach the wind has picked up, blowing the sand and flotsam everywhere. The wind is causing waves on the water of the lagoons where gulls are paddling. Quite a serene atmosphere, that is until a playful Labrador arrives with its owners. Then all hell is let loose as a flash of gold whooshes past and enters the lagoon at breakneck speed; water splashes everywhere, the gulls take flight squawking angrily at the dog that seems oblivious to the turmoil it has caused.  The gently sloping cliff behind me is awash with a myriad of greens while patches of yellow burst through in the clearings. I think these are Celendine or Bird’s-foot-trefoil . I am too far below to make them out.  Small bushes of Sweet Cicely (Myrrhis odorata) poke out from beneath the trees.

Around the lagoons the sand is soft but walkable with a covering of tiny Sand-grasses (Mibora minima) and Stonecrops (Sedum album). Between the lagoons and the sea are small sand dunes which look alive as the Maram-grass (Ammophila arenaria) sways and swirls with the wind, like waves rippling across the sea. In mats amongst the pebbles around the sand dunes, Sea Rocket (Cakile maritima) proliferates.

An opening, over steps, leads behind the sea wall into the nature reserve and the fresh water lagoon.  There are many paths winding their way into the reserve but I kept to the sea wall path. An abundance of wild flowers here; Brambles, Valerian, Gorse and dried husks of grasses and reeds line the track, while carpets of Daisies and Bugle lie across it, all this intermingled with Vetch, Trefoil and Celendines. Across the lagoon nestled among the reeds is a pair of Mute Swans (Cygnus olor), one sitting on their nest and the other standing guard. Mallards and Coots are sharing the expanse of water with the Swans, some diving for weed, others slowly paddling and minding their own business. 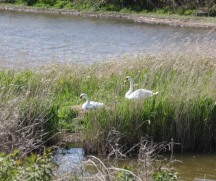 On one side of the lagoon the old Lime works towers above; and across from it are the slag heaps which are now landscaped with grasses and flowers, where notably a number of types of Orchid are said to be growing. I must return to the slag heap later in the year to catch sight of these beautiful flowers.

Over the wall glimpses of the pebbled, driftwood strewn beach can be seen, quite a contrast.

Here is a patch of Dandelions, which has seen better days, just a few yellow heads poking through the fluffy seed heads of fairy parachutes. A swift breeze and they rise majestically on the air currents, leaving serried ranks of stalks looking like knitting needles thrust into the earth. However, the Groundsel (Senecio vulgaris) is starting to flower; its flowers are perched in clusters above tallish branched stems with quirky almost spiky leaves similar to the shape of very thick green stick insects.

The path is then segregated between sea wall and the perimeter fence of the Power Station grounds. Sea-buckthorn (Hippophae rhamnoides) seems to have taken root along here with mixed grasses and some of the previously mentioned flowers with the addition of Silverweed (Potentilla anserine), with its hairy silvery backed leaves, and Common Stork’s-bill (Erodium cicutarium), having small pinnate or fern like leaves, neither  of them in flower. There are numerous ant hills and the ants can be seen scurrying along in lines, following a path only known to them. A caterpillar, black hairy back with gingery undersides, has succumbed to the attentions of the ants. I have no idea of its species but it could be a Common Footman Moth ( Eilema lurideola) caterpillar or a Garden Tiger Moth (Arctia caja )caterpillar.

The Power Station was built in 1966 on the site of a golf course. This first Station was the most advanced in the world at the time, and it operated until 1995 being demolished in 1998. A second station was built in the early 1970’s and updates have taken place; it is still in operation. Two-thirds of its coal intake is from Wales, the remainder being either foreign low sulphur coal or biomass. NPOWER are the owners at present and it is they who have been instrumental in the reclamation of the slag heaps and conversion to a nature reserve.

The beach beyond the wall has patches of sand uncovered by the receding tide. There are groynes along this stretch snaking from the wall into the sea. A number of plants, Brambles and Common Ragwort (Senecio jacobaea) have colonised them above the high tide mark.

It provided a safe harbour for the area’s early development and trade. Now, however, the paved banks of the old dock are covered with Rock Samphire (Crithmum maritimum). You are now outside the wall but between it and metal rails. The path then crosses the inlet via a bridge. You can access the beach here but it is quite a scrubby wasteland with large loose pebbles, drift wood and detritus. I would stick to the path, even though it becomes a little claustrophobic. The sea wall is higher and even if I make like a kangaroo I would not be able to see over it. There are, however, sturdy steel steps which enterprising fishermen can make use of to access the beach. This part of the coast is well known for the good sea fishing. The wall is encrusted with moss, Bristle-moss (Orthotrichum species) and lichens. Also the wire fence to the other side of you is punctuated with tufts of grass: Common soft-brome (Bromus subsp.hordeaeceus), Sweet Vernal-grass (Anthoxanthum odoratum), Wall Barley (Hordeum murinum) and Perennial Rye-grass (Lolium perenne). The concrete path swirls around the Power Station, with its unsightly coal and log heaps and numerous types of large vehicles and machinery, until it reaches Limpert Bay, Gileston. I must say this was not an enjoyable bit of walking but it did give a different perspective on a coastal walk. The coast is not just there for enjoyment; it serves a higher purpose as is seen by the many industrial areas it encompasses, including the Barry and Cardiff Docks.

At Limpert Bay are information boards relating to the Glamorgan Heritage Coast and the Wales Coastal Paths, together with notes on tides, flora and fauna of the area. Along the top of the beach there are

WWII coastal defence emplacements and the remains of a cottage. The cottage was certainly inhabited in the late 1980’s. Out to sea, a number of tankers are ploughing their way to the previously mentioned docks. From here I walked up the road towards the pretty Gileston Village, which has held the prodigious title of “Best Kept Village in the Vale”. The hedges along the road look like parallel railway lines awash with the waving frothiness of Cow Parsley. Above them are effervescent May Flowers in their prime, their branches dripping with white florets. 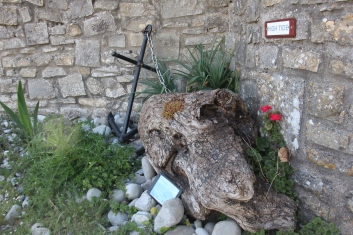 The walk ends at the high tide mark. This is a considerable way inland from the beach. The Bristol Channel has the second largest variation of tide in the world, due to the topography of the land and its influential pressure systems. In 1607 the Bristol Channel is recorded as experiencing the worst flood ever. Gileston took quite a battering.