My daughter and I continued following the Estuary. Here the WCP takes the form of the Millennium Coastal Path. A tarmac path, skirting the Wetlands, lined with broadleaf trees, bushes and colourful flowers, was easy walking.  Several people were out and about enjoying the sunshine. 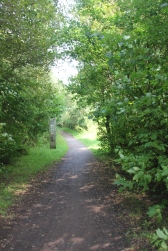 With the dappled shade and a slight breeze, we walked in relative comfort. The Dragonflies were certainly happy: numerous Southern Hawkers and Common Darters were basking on the branches, surprisingly sitting quite still, not flitting energetically around us. The shade was supplied by Willows, Alder, Viburnum, Hawthorn, Hazel, Blackthorn, Wayfaring Trees and Sycamore; berries and seeds added colour to the various greens of the leaves. Some Gorse, Dog-rose, Buddleia and Bramble were evident in the lower tiers, with Wild Honeysuckle and Bittersweet winding through them. Yellows and pinks featured in the floral cornucopia: Great Willowherb, Narrow-leaved Willowherb, Herb Robert, Hemp Agrimony, Imperforate St. John’s-wort, Black Medick and Fleabane. In amongst the greenery were dancing Speckled Wood butterflies; pairs circled each other before they flew off into the trees.

Breaking the cover of the trees, we walked along a wide gravel path where Common Reeds and Teasel joined the other flowers mentioned.

The view was of industrial land which had now become overgrown. In the distance, was a chimney stack, evidence of the lands previous usage. On cleared ground, there was much activity; roads and houses were being built with alarming speed. However, none of this activity was a deterrent to the Dragonflies, as many of them were still flitting about in the sunshine.

Without the shade of the trees, we were getting rather warm and the time had come to rub copious amounts of suntan cream on our arms. The sun was very hot now and the glare was almost blinding. There were clouds in the sky but they were a very wispy affair. 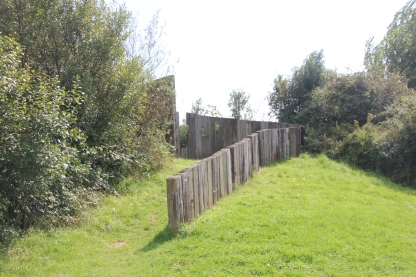 A quiet seating area led off to the left of the path. A welcome break. The wooden structure with strategically placed gaps, allowed a tantalising glimpse of the estuary beyond. Speckled Woods and a cheery Robin were also taking the opportunity to rest in this peaceful spot. My daughter jumped up unexpectedly; she had been bitten by an insect of some description. We noticed the warm grass was rustling with several insects. Not wishing to disturb these residents, we quickly moved away but not before the biting culprit had been photographed. 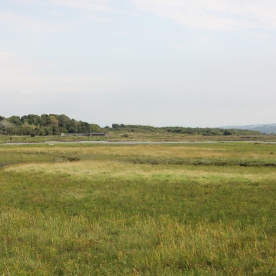 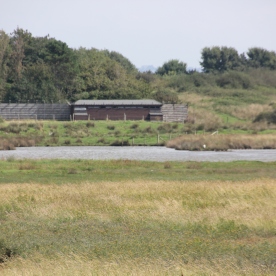 Around the bend and the seawall made an appearance. We climbed a bank to peep over the wall. Arrayed in front of us was the vast expanse of the saltmarsh and the scrape. A view, all be it from a different direction, can be seen from the British Steel Hide on the site of the Wetlands. In fact, the Hide could be seen in the distance. In our exposed position, the wind seemed to be gathering speed; our hair was blown into our eyes and made focusing our cameras difficult. We could see lots of birds near the water and in the reeds and sedges. The camera lens was not large enough to photograph clear close-up pictures.  Therefore, we used our binoculars to identify them:  a Spoonbill, some Egrets, Lesser Black-backed Seagulls, a few Lapwing and Cormorants. We walked on the top of the bank for a while, saltmarsh on one side and the Machynys Golf Course on the other. Yellow and pink flowers: Common Ragwort, Knapweed, Thistles and Sea Bindweed, broke up the beige monochrome of dried grasses: Cock’s-foot and Rye-grass. Fly-away, fluffy seed-heads of Dandelion and Thistle were everywhere. Several other seed-heads were also punctuating the grasses: the spidery seed-heads of Cow Parsley, pineapple shaped seed-heads of Knapweed, globular seed-heads of Sea Radish and tiny grape like seed-heads of Broad-leaf Dock. Lyme-grass and Sea Asters dominated the saltmarsh near the wall. Pale lemon spires of the Lyme- grass flowers were a lovely contrast to the deep yellow daisy-heads of the Asters. Lots of butterflies adorned the Ragwort flowers on the bank. There were brightly coloured Small Tortoiseshells and more muted Meadow Browns.

After we crossed a metal bridge over a small stream we could see numerous golfers teeing-off and putting on the greens of the golf course. On the other side of the Golf course new housing estates were covering the ground once covered with heavy industry. However, Tata Steel’s Trostre plant was still quite dominant on the eyeline.

As we walked along the path, the vegetation was ever changing. 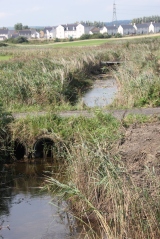 Darters were abundant in the swampy areas around the golf course. A huge swathe of Tall Melilot interspersed with Hemp Agrimony suddenly emerged around a bend in the track. The margins of a large lake were congested with reeds, sedges, Hogweed, Willowherbs, Water Mint, Purple Loosestrife, Fleabane, Yarrow and Red Bartsia. The sun highlighted the ever-so small ripples on the lake. This was followed by a shimmering area on a gravelly incline, which was lined with Silver Maple, White Willow and Sea Buckthorn. All the plants had silver/grey backed leaves and stems. The Sea Buckthorn berries stood out, shiny bright orange jewels in the sunlight. A magical atmosphere. 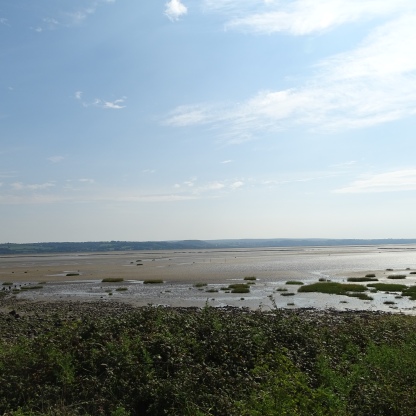 At the top of the incline we met the estuary again. Yet another contrasting view; gone were the lush plantings. They were replaced by flat open sand or mud, with a few small rocks and little green hummocks of sedges. Dried grasses, a few Wild Parsnip and straggly Brambles lined the path. In fact, it looked as if the estuary was fully drained of water with wooden posts stretching out into and emerging from the mud.

Distant views of the opposite side of the estuary could be seen: Crofty, Llanrhidian and Whiteford Point. The Whiteford Lighthouse could also be seen way off in the distance. 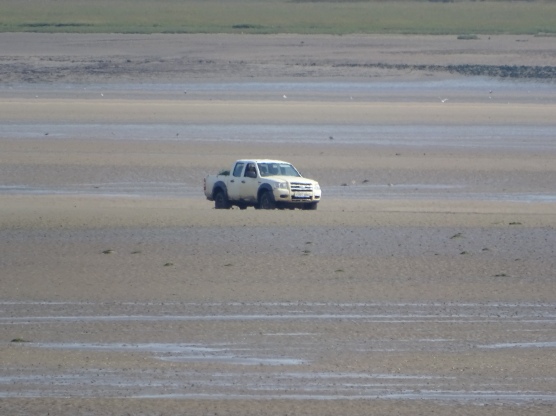 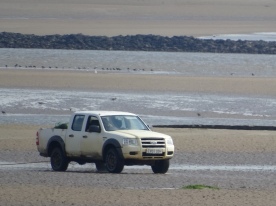 Suddenly, to emphasise the fact that it was low tide, a convoy of pick-up trucks came splashing across the sands heading for a rocky outcrop further along the estuary. It beats travelling all the way around and crossing over the estuary by the bridge at Lougher I suppose! 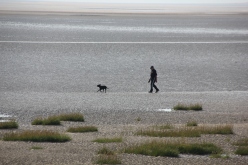 There was even a man walking his dog way out on the mudflats. A few Pied Wagtails and an odd-looking bird were flying around and landing near, slowly drying, puddles on the path. As the convoy passed we could just see several Longtail Godwits feeding out in the middle of the estuary. A Magpie and a Turnstone joined the melee of birds. Ragwort, Dried Dock and Sea Mayweed sprouted through the grasses along the track.

The whole area that we were traversing was called Machynys or Monk’s Island. This low lying, often flooded, spit of land was an island up until the 19th century.  In the early 20th century it was populated by heavy industry workers. There were foundries, Iron, Steel and Tinplate works, Chemical works and Brick works, many of these works closing before the 1960’s. The iron foundry passed through several owners from its opening in 1874 until its closure as an engineering works in 1985. The chemical works manufactured napha, acetates and sulphuric acid, the latter being used by the tinplate industry for cleaning iron and steel; it closed in 1913. There were surface clay deposits in the area and this facilitated the establishment of a brickworks which operated from 1860 to the 1920s. With the arrival of these industries more land was required and the seawall was built and the tidal marsh drained, turning the former island into a peninsular. 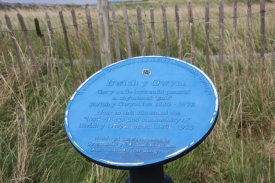 Further along the path is a blue plaque commemorating the loss of the village and community of Bwlch y Gwynt. It was established in the 1880s to furnish the burgeoning industrial works. It was demolished in 1971/3 to allow for regeneration of the area, now that the heavy industries were defunct. Many families lost their homes; they were re-housed in Morfa and Llanelli and were left with only memories. 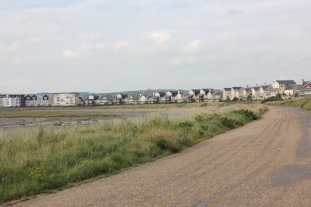 Once again, the plants bordering the path had changed, such a variety: Common Toadflax, Evening Primrose, Creeping Cinquefoil (leaves only), Japanese Roses (both pink and white forms) with large bulbous red haws, Wild Carrot, Marram-grass, White Melilot, Common Vetch, Wild Mignonette, Bird’s-foot Trefoil, Sea Mayweed, Black Mustard heavily seeded and Bristly Sow-thistle. Many of these plants were covered with small snails. Another blue plaque announced the site of Machynys Farm where a Dark Age monastery of St. Piro was reputed to have been established. It was superseded by Machynys House and later by Machynys Farm, which was demolished in the 1970s.

We continued along past a modern housing estate towards the mouth of the Afon Lliedi and the New Dafen River, where we ended our walk.