Now that I am fairly proficient in grasping the peculiarities of the Traveline ‘app’ I quickly find a route to suit both myself and the bus timetable, I think. On a day in May, a little cloudy with a brisk wind but fine, I park the car at the lay-by opposite Saint John the Baptist church, on the corner of South Road (B4267) and Cog Road. 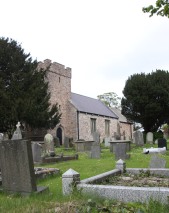 The bus stop is just a few yards from the lay-by. Timetable reads: Buses arrive at 6, 14 and 26 minutes past the hour and the service is either No. 88 or No.94. Oh good here is a bus. Wow it’s not stopping. The driver has seen me and pulls up a little way from the stop.   “You’re supposed to stick your hand out deary, there’s more than one bus comes this way. Pop your pass on there and we’ll be off.” I explained I’d not been on public transport in a while; he just smiled knowingly.  Next stop the Golf Club. No I’m not trying a different sport today that is the name of the bus stop I get off at.

Ok. Cross the road and turn left towards Westbourne road. A few yards up Westbourne Road take a right onto Forrest Road and follow to the end, where I hit the coastal path, not literally but it is perpendicular to my path to here. I Turn right onto the path which is of a sound tarmac and like an arrow passes between the edge of the cliff and a row of very well proportioned houses. You have beautiful views of the sea and coast, both Welsh, and if you are lucky on a fine day, the English. However, today is over cast so no such luck. The three Islands can also be seen. These are Flat Holm, Steep Holm and Sully. The path is littered with hoards of dogs and their owners out for the daily constitutional. Most are well behaved and some are on leads, but watch out. Here comes a rabble of six dogs, all shapes and sizes, enjoying themselves barking and playing together, passing the time of day, as are their owners (passing the time of day not barking you understand). Help I’m surrounded. I don’t mind the bigger ones but the tiny yappy ones I can’t abide. Oh well off they go and I must continue with the sound of wind, and thankfully no barking, listening to the gulls as they appear to be striving to come inland but are continuingly being buffeted by the said wind.

At the end of the path is a kissing gate which leads on to a grittier path between hedges of hawthorn and brambles and some spindly trees. This area of the coast is called The Stairs. 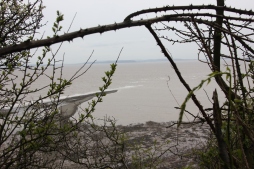 The wind has died down here and other birds can be heard merrily chirping away. I distinctly heard a blackbird calling throatily from its perch; the others I am unsure of. Along the path flowers are starting to bloom in contrasting colours, the pink Herb Robert (Geranium robertianum), the yellow Lesser Celandines (Ranunculus ficaria) , Dandelions (Taraxacum officinale),the occasional Cowslip ( Primula veris) the white Cow Parsley (Anthriscus sylvestris) and the green Lords and Ladies (Arum maculatum) with a few yellow-green bracts with the brown flower spikes starting to emerge. Glimpses to the left are of sea and rocks way below the cliff. These are the Roundbush Rocks.

As the hedges thin out more views of the sea and the lighthouse on Flat Holm are seen. Soon a steepish downhill section appears but it’s quite safe as there are railings to the left. As is invariably the case this leads to a slight incline which soon flattens out before a much steeper incline with railings for grabbing or pulling one up. I took this part just a little slower, feeling the tug on my knees. At Lavernock Point there are magnificent views and a notice board full of interesting information about the flora and fauna around the area at different times of year. Further along is the Marconi Tower, a little overgrown, and litter strewn, well and truly locked with padlocks.

It is from this area, Lavernock Point that Guglielmo Marconi sent the first radio message across water to the Island of Flatholm, a mere 3.7 miles (6 Km.). The message read “Are you ready”. I am ready to carry on and not much further on the end of this path is in sight. Well I never, to greet me is a very loud and strident Robin (Erithacus rubecula) singing his lungs out while perched upon the gate post. Absolutely glorious!

The gate leads on to the road and away from the coast. Just on the right hand side is the church, Saint Lawrence at Lavernock.

There are a few people about but I immerse myself in taking photographs and reading the plaque erected to commemorate Marconi and Kemp’s first radio message across water.  One gentleman approached me and asked if I would like to see inside the church as he had a key. The church is not usually open to the public but there had been a meeting about restoration of the church and its environs. The charitable organisation is called SALt.

I had a choice now to follow the coastal path, which actually goes inland before

returning to the coast at St. Mary’s Well Bay, or to clamber over the rocks on the beach along to St. Mary’s Well Bay and Swanbridge Bay. Since it was low tide I thought, well I did want to walk the coast, so I walked back towards the beach. There is a small opening which takes you down a rough path used by fishermen to access the beach. I’m glad I had my stick with me as the path was slippery and rutted. The last step was in fact a jump but I made it. 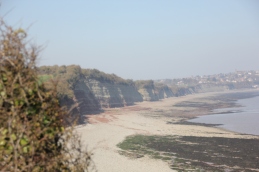 Ah now to tackle the beach. The views of the multicoloured cliffs are a spectacle. These include Blue Lias limestone, deposited in a marine environment during the Triassic and Jurassic eras and are a source of many marine fossils. Watching my step on the pebbles the first obstacles to overcome were the groynes. This must have been a sight as I tried to haul myself up one side then jump cautiously down the other. The beach seemed to be made up of wide stretches of rock pavements where I saw some fossils imbedded in them and even some dinosaur footprints. The flatter rocks had amazing patterns, some like swirls, others like paving stones.  I kept moving towards the headland where beyond would be St. Mary’s Well Bay.

Once around the corner the beach became a little rocky, with patches of very soft sand, rock pools and lots of seaweed strewn rocks. Bladder Wrack (Fucus vesiculosus) seems to be the most abundant but some Green seaweed (Ulva species), Thongweed (Himanthalia elongate) and Flat Wrack (Fucus spirilis) were also present. On the sections of sand were numerous gull footprints which caught my eye in their simplicity but very attractive artistically. It was while looking at these prints that I walked a bit too far on to the sand and found myself slowly sinking. The stick was no help as it sunk even deeper and I became muddier by the minute. Having extracted myself from this sticky situation I found a suitable rock pool to wash the muddy sand off. Perched above the cliffs of the bay were the caravans of the holiday park. They seemed to watch over me as I cautiously stepped from rock to rock trying to avoid the soft sand. Here you could clearly see Flat Holm and Steep Holm. I say clearly but there was still a slight haze and Somerset was nowhere in evidence. The end of the bay was punctuated with what looked like a WWII pill box.

Around Ball Rock and into Swanbridge Bay a much smoother beach, quite sandy with lots of shingle. Sully Island and the causeway were visible.

There were a number of seagulls and a few oystercatchers on the shore. 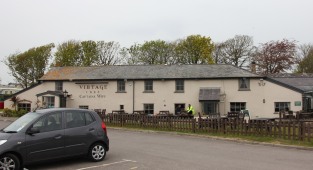 The climb up the beach to Swanbridge Road was a bit precarious with loose boulders and ever shifting pebbles. I made the road, walked past Swanbridge House  and farm, which has now been converted to luxury houses ( perfect situation, what a view from here).The road ends here but I proceeded through a gap in a wall to the forecourt of the Captain’s Wife, a Vintage Inn, where I stopped for a drink and a bite to eat. It had taken me two hours to reach this point, so it was time for a rest.

After my repast, I walked through the car park and up the road towards Sully, past the mobile homes of yet another holiday park. A little way along on the left hand side is a kissing gate which leads onto a playing field. I kept left along the hedge and skirted the field. At low tide you could walk along the pebbly beach of Sully Bay, but I had had enough of scrambling for today and took the softer surer footing of the field. I watched some enterprising Robins and Blackbirds (Turdus merula) patrolling the grass verges near the hedges, now and then flying off with their well deserved catches of worms or insects. There are some large standing stones along this stretch of the coast which serve as way markers.  The path from the field, through another kissing gate, follows the beach past houses on the right with a view of Hayes point in the distance. This path takes you alongside the Sully Sailing Club and other playing fields. It then becomes pebbly and a little overgrown with Wild Parsnip (Pastinaca sativa ) and Rape (Brassica napus).  There is a bench conveniently placed to see the three Islands and Hayes Point in the distance. Here I turned right onto a tarmac path towards the main road in Sully. Houses loomed over walls to the right and hedges of mixed trees and flowers were on the left.  This is a lovely well managed path where the trees have been coppiced, Brambles (Rubus fructicosus) kept tidy and regeneration is well on its way.  A stunning range of wild flowers: Cow Parsley, Clevers (Galium aparine) (I know it as Bobby Buttons but my daughter calls it Sticky Back), Lords and Ladies, Bluebells (Scilla non-scripta), Herb Robert, Celendines, Dandelions, and a few Cuckoo flowers (Cardamine pratensis) appear in succession. To the end of the path the smell, before the actual sight, of Wild Garlic or Ramsoms (Allium ursinum) wafts in the air in front of my nose. House Sparrows (Passer domesticus) are tweeting in the branches.

There is a kissing gate and way marker here.

I turn left then cross the road to the lay-by opposite the Norman church of Saint John the Baptist, Sully. There awaiting my arrival is my car. So now it’s time to go home to a warm shower, a cup of tea and a sit down. I did toy with idea of popping into to the Sully Inn which is just around the corner from the church. A day well spent, plenty of fresh air, exercise, educative content and quiet contemplation.