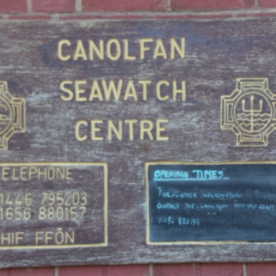 The last Saturday in May, the day is clear, windy but with sunny spells. I sound like the weather man, Derek Brockway, weather man walking ha, ha…. I am on my own patch today and the bus pass can take a rest. I return via Trebeverad and the track passing the barn conversions to Summerhouse Point. The path to the Seawatch Centre is alive with bird song, butterflies flitting about and insects buzzing: Wasps (Vespula vulgaris),Common Drone Flies (Eristalis tenax), Hoverflies (Chrysogaster species)and Blue Bottle flies ( Calliphora vicina).The May flowers are almost past their best and flurries of snow like blossom are blown which way and thither. Nettles nestling below them are dotted with what look like white paint drops made with a very fine brush. The undulating steps between hedges leading to the Seawatch Centre are over hung with Travellers’ Joy, their tendrils catching your face as you pass. The Centre, a converted H.M. Coastguard lookout station, is open at certain times, telephone (01446 795203 or 01656 88015) for updates, and the staff are very helpful and informative. It has a commanding view of the Bristol Channel and the coast of Somerset. You will find sea charts, radar, tide times and other navigational aids here. 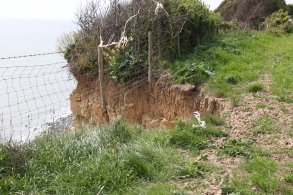 During the winter months part of the coastal path had subsided so an alternative path over a stIle and around the edge of the cereal fields has been mapped out. You can clearly see where this has happened at certain points along the path; whole areas are safely cordoned off. In total there are about six fields to traverse, all at different stages of wheat or barley growth and others newly ploughed and seeded with corn.

Each field usually has a kissing gate or stile to negotiate to access the next. The Sloe and Hawthorn trees have their blown shapes away from the cliff, quite characteristic of this area.

The cliffs themselves look like the hanging gardens with grasses, rape, ivy and lichen clinging to them. At the top of the cliff masses of Groundsel (Senecio vulgaris) have taken root.

There are many birds about; Swifts flash over the fields and cliff and present a very difficult photographic shot. Gulls stately glide above the cliffs often in groups, and other birds dart from hedge to hedge and yet others swoop up and down into the fields of Wheat or Barley. The barn conversions are now parallel with the path and a clear view of all of them is evident across the field, while the path is lined with a myriad of grass species, nettles, cow parsley and wild parsnip and carrot, lichen covered Hawthorn and Sloe bushes which now hide the cliff from view and the whole expanse seems a little safer. Tiny whorls of purple bubbles are signs of the nettles starting to flower, and Creeping Thistles (Cirsium arvense) are also producing their flower heads amongst the vegetation. Butterflies are fluttering about; a Small Tortoiseshell (Aglais urticae) suns itself upon the path and Large and Small whites (Pieris brassicae and Pieris rapae) swirl in pairs above and into the cereal fields. Views of Llantwit Major can be seen across the fields.

This part of the Coastal Path is frequented by more walkers than any other section I have walked so far. Couples hand in hand and others with their, I must say, well behaved dogs. Soon the hedges disappear and the wide expanse of the Channel looms into view as you slowly descend towards the cliffs again. Somerset, although a little hazy, is giving up some of its secrets and structures at Minehead can be clearly seen. In the distance to the west are views of Nash Lighthouse. Patches of Gorse punctuate the meadow- like feel of the place. Buttercups, Common Mouse Ear, White Clover (Trifolium repens) and Greater Knapweed (Centaurea scabiosa) flower between the grasses. Among these plants are Rabbits (Oryctolagus cuniculus). In fact one is sitting right in front of me on the path; it soon scarpers as I approach. There have also been some sheep along here at some time as the path is littered with sheep droppings.

At Stout Point there is a steepish incline, appropriately named New Way Stair, where there is a choice to be made: either to wend my way home past Rosedew Farm and then on to the road or to continue to Cwm Colhuw. I Plump for Cwm Colhuw and Llantwit beach. Views of Llantwit Major and the church can be seen across the fields. So passing Pigeon Point, the  meadows and the Castle Ditches I proceed down a narrow track, with passing places, on the right side of which are paths leading  through the trees into the Nature Reserve, an area I will leave for another visit. Wood Speedwell (Veronica Montana), Red Campion, ferns and other shade loving plants can be seen growing under the trees of the reserve.

From the top of the cliff I can see that the tide is in, the sand on Llantwit beach is covered and waves are splashing the rocks with spray, while over my shoulder I can see the Cwm Colhuw valley and Avon Colhuw. This is the way I must walk home.

To the beach car park there is an uneven track which leads on to a concrete path that switchbacks all the way down to the beach. The path through Cwm Colhuw valley is tarmac until you come to a kissing gate which takes you onto a field path. The Avon Colhuw, a

plant choked stream, runs almost parallel to it. There are a number of birds flying around notably some Long-tailed Tits (Aegithalos caudatus ) chattering in the bushes, a cheeky Magpie strolling towards me on the path, a Rook (Corvus frugilegus) foraging among the buttercups and grasses and a Buzzard (Aegithalos caudatus) majestically soaring above me. In the shade are some Lords and Ladies looking somewhat jaded. Their sheaths are flaccid, dried in some cases and sporting green fruiting heads which later in the year will turn bright orange/red. Also here is some yellow Herb Bennet or Wood Avens (Geum urbanum).

At the end of the field is a kissing gate, the road then takes me home, all uphill from here. In the trees are one or two playful Squirrels (Sciurus carolinensis) who keep me company for a little while. I then reach the conurbation known as Ham Lane. I will soon be home.